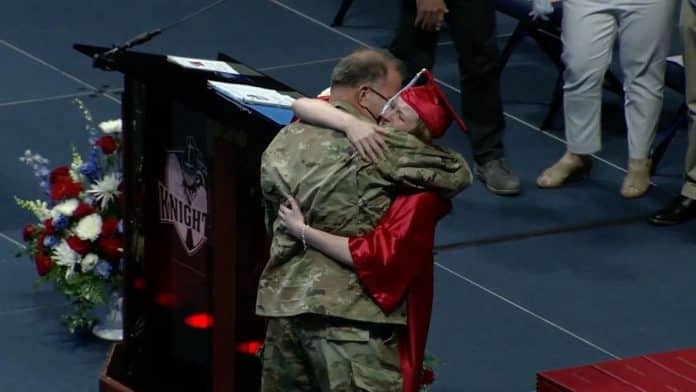 A high school student was given an emotional surprise ahead of her graduation, as her military dad who she thought was still overseas suddenly appeared.

Grace Macke, who was graduating from Kings High School, in Kings Mills, Ohio, had not seen her father Master Sgt. Drew Macke since the fall, when he was deployed to the Middle East.

A resigned Grace did not expect her father to be able to attend her big day, but while she was on stage, she was told to check the big screen.

There, a message from her father – who she believed was abroad – was meant to play, but the feed conveniently “broke” after Sgt. Macke introduced himself.

Then, from the side of the stage, Sgt. Macke of the U.S. Air Force suddenly appeared.

The surprise took place on the weekend of May 15, and as Sgt. Macke walked across the stage, Grace, who started to cry happy teams, moved in for a long-awaited hug.