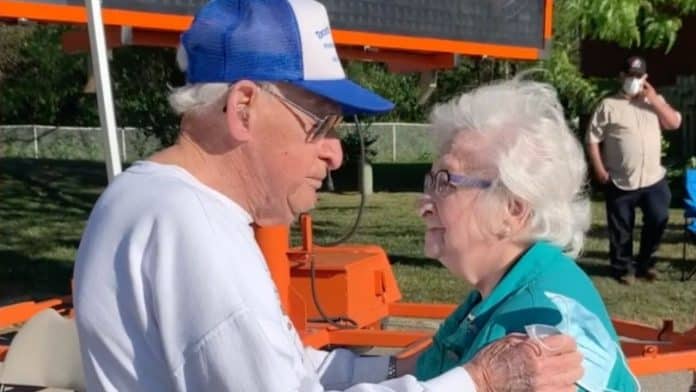 A great-grandfather couldn’t hold back the tears on his 100th birthday thanks to a surprise visit from his 98-year-old sister he hadn’t seen for more than two years.

In the heart-warming video, Norman Gogo is standing outside his home in Penetanguishene, Ontario, Canada, as a parade of classic cars pass by as part of his birthday celebrations.

Norm, who spent five years overseas fighting in WWII and is the oldest living veteran in the region, was also surprised with a stunning fly-by.

But his biggest surprise, on his June 16 birthday, was when one of the cars pulled up and out stepped his sister, Jeanne Allan, who lives in Toronto.

The pair had been apart for more than two years, family members said – a separation made worse by the isolation of the pandemic.

Norm and Jeanne are the oldest of nine children and the only surviving members of their siblings.

Jeanne then walked towards her brother, jokingly stating, “An old lady’s come to see you,” as the pair shared a loving embrace with friends, family and neighbors clapping in the streets.

READ MORE: Soldier Out Of Coronavirus Quarantine After Returning From Nine-Month Deployment Reunites With Family Before 100 Cars Drive By In Homecoming Parade

Norm, who also served 35 years as a member of the Toronto Fire Department before retiring as chief, lives in the same town as great-granddaughter Emily Knight, who filmed the reunion.

She posted the clip on social media where it immediately went viral with millions of views and an outpouring of well-wishes from across the globe.

Emily said: “I cried seeing his reaction to the surprise – it was an emotional event all around.

“My great-grandfather also doesn’t often show emotion, but when he does it makes us all cry.

“I think there is something so special about seeing a 100-year-old and a 98-year-old seeing each other and reconnecting, especially when they are members of your own family.

“I honestly cannot believe the response this video has received. It’s been amazing.

“I know my entire family is just so surprised it went viral like this.

“We all know Norman is amazing and special, but now there are a lot of people around the world who think so too.

“We also think this video just came at a really good time to uplift people and bring some happiness to those who see it.”