Home Good News Man Reunites With Grandma Who Raised Him Four Years After Moving From... 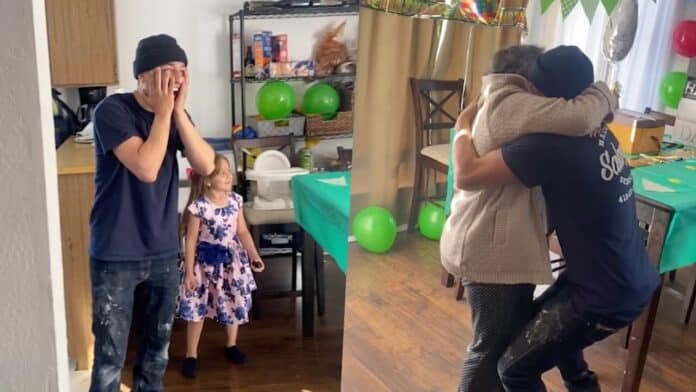 A man who moved to the United States for a better life could not fight back tears as he returned to his California home on his birthday to discover the grandmother who raised him.

David Salas had not seen his grandma Ana Belen for more than four years when he walked into the living room of his San Francisco apartment.

As soon as David, 23, saw the familiar face staring back at him, he immediately headed over to Ana, 65, for a long-await hug – a moment put on hold due to his move, building a new life and the coronavirus pandemic.

According to David’s fiancee Maria Vega, 23, who helped arrange the surprise, David never knew his father and his mother could not raise him, so Ana, from Bogota, Colombia, took over such duties.

David grew up seeing Ana as a mother, but in 2017 he decided to move to America for a better life, which his grandmother fully supported.

The separation was tough on David, and ahead of his birthday, Maria – who has been with David since they were 13 – was wondering what to get a man who doesn’t care for material possessions.

Family is everything for David, Maria said, and so she secretly helped arrange Ana’s flights, navigated her through the airport, collected her, and went with her to buy a cake and decorations before David returned home.

When he did, David was blindfolded as he walked into the living for the big surprise, which Maria later shared online to millions of views.

The moment took place on March 26, 2021, but Maria did not upload the story online until recently, having been encouraged by friends and family.

Maria, who has two children with David and another on the way, said: “Seeing his reaction was everything to me.

“Seeing him so happy was something unforgettable.

“I knew it would be the best birthday surprise for him – he has been a very good father and husband and deserves the best in the world.

“I showed the video to my friends and family and they insisted that I upload it to the internet.

“I uploaded it and in about six hours I already had more than 100,000 views and many comments on TikTok. People wrote me very nice things.

“The message I would like to share is that material things come and go and are very easy to achieve, but these little moments of happiness are worth more than all the money in the world.

“For us, family is always most important, above all things.

“Valuing our parents and grandparents, who have also given their lives for always giving us the best: these are the ways to thank everything they do for us.”