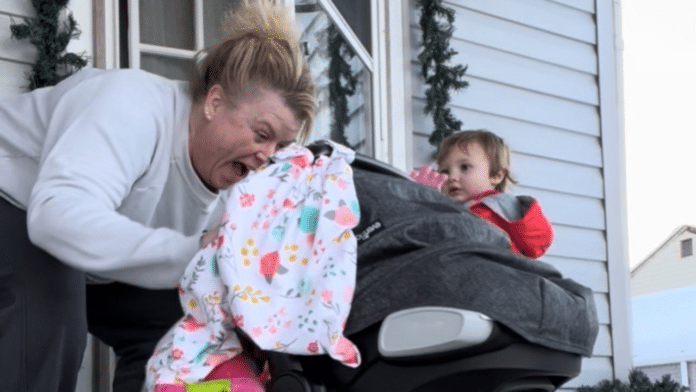 A grandma could not believe her eyes when she heard a knock at the door and discovered her first baby grandchild, who had been living across the country because of her dad’s military duties.

Kim Milhoan, 49, let out a shriek of disbelief when she looked down and saw four-month-old Everleigh Lambo on her porch.

Kim lives in East Liverpool, Ohio, but due to her son-in-law Azaan’s military duties as a sergeant in the Marine Corps, he and Kim’s daughter Hannah, 23, are now based in Chesapeake, Virginia.

Originally, Kim had planned to visit Hannah for a number of days around the time of Everleigh’s birth, but complications later kicked in.

Hannah’s labor was longer than expected, which meant that Kim and her husband had to fly out the very day Everleigh was born, only seeing her briefly.

Hannah was determined for her mom to see Everleigh once more.

Ahead of Thanksgiving, Hannah contacted her best friend, Victoria, who is also from East Liverpool but now lives in Jacksonville, North Carolina.

She asked if Victoria and her son, Elliot, were planning to make the trip, and the pair then planned the ten-hour drive with the intention of surprising Kim with her baby granddaughter.

Kim often calls her daughter for a chat, and so on the journey, Hannah had to reject multiple video call requests as not to show the mountains of Ohio in the background.

Then, on November 20, Hannah arrived at her parents’ home, where she placed Everleigh on the porch, knocked, and hid – her camera rolling the entire time.

When Kim walked out, she was shocked to find not only Everleigh but Elliott running around, too.

Hannah then headed out to greet her mom with tears in her eyes behind the camera.

The moment was later shared on Hannah’s TikTok channel a couple of months after the surprise.

Hannah said: “I immediately was crying, Everleigh is the first grandchild to my parents and first niece to my sister so she is beyond loved.

“When she saw her and saw me she immediately started crying.

“If you see she opens the door and says, ‘What the hell are you doing?’ then proceeded to grab Everleigh.

“Being a military spouse is really hard, not to mention being a mother to a child who won’t necessarily grow up being really close with their biological family, so when you have a chance to spend some extra time with family, take it; it makes it very special.

“I hope that others decide to surprise their loved ones a little more – it makes life more enjoyable, especially when you’re away from family as much as we are.”