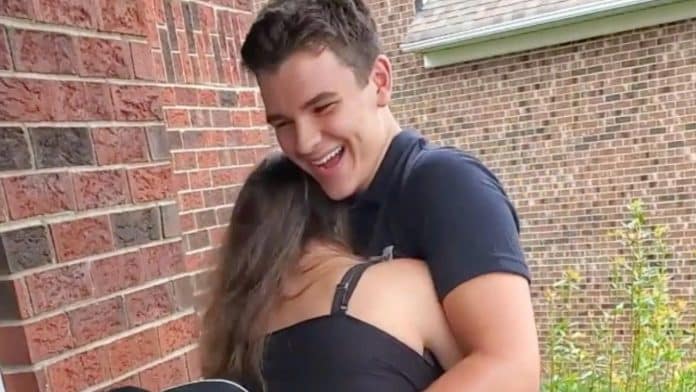 A thoughtful teen travelled across America to surprise his best friend since childhood dressed as a FedEx deliveryman – causing her legs to give way in complete shock.

Despite the distance between them, Soultana would still make an annual visit back to Rochester to visit Jory and his family.

But this year, because of the precautions with COVID-19, that trip was cancelled, adding to the disappointments Soultana was already facing during her senior year of high school.

Knowing how sad this had made his best friend, Jory and the families started working on a plan to pay a surprise visit to South Carolina.

Jory’s mother, Lynn, purchased a deliveryman outfit from Amazon, and Soultana was told that her Greek grandmother had mailed her a package that she would like a video of her opening.

As Jory and Lynn drove to South Carolina, they were frequently texting Soultana’s dad John with updates.

Ahead of the visit, all family members were also tested for COVID-19, John said, so that they knew the travel arrangements would not be spreading the virus.

Then, when it was time for ‘grandma’s package’ to arrive, the Kotrides family began filming Soultana as she went to collect it.

Initially, Soultana accepted the package without realizing what was happening.

Then, as Jory removed his mask, a moment of realization struck, and Soultana darted to hug her best pal, her knees giving way in shock just as she was about to do so.

Speaking of the moment, dad John said: “I was near tears watching the strength leave Soultana’s legs as Jory removed his mask.

“It could not have been more perfect.

“Friends, family and complete strangers have all commented on the positive emotions these two young adults exhibit – true friendship.

“Making this happen wasn’t easy – work schedules, travel, testing during a pandemic to ensure we were being responsible, a ton of moving pieces.

“But the 48 seconds represented by this video were more than worth the effort – these kids will remember that minute all their lives.”