Home Good News “My Baby!!”: Mom Darts Across Family Gathering With Tears In Her Eyes... 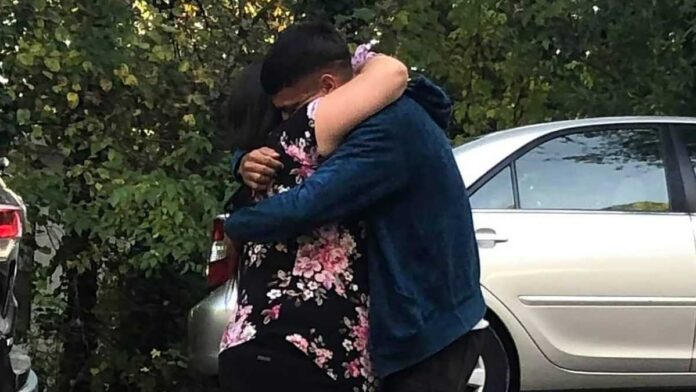 A loving mother screamed in shock and darted through a family gathering when, out of the corner of her eye, she saw her son, who she had not seen since he was three years old.

Tracy Faunce, 42, was caught completely by surprise when her son Christopher, 18, came around the corner, running across the yard and into his arms for an emotional reunion and floods of happy tears.

The moment took place on October 23, in Winston Salem, North Carolina, where Tracy currently lives, along with her sister, Terry Gibson, 39.

Terry Gibson secretly planned the reunion with Christopher, keeping silent about the surprise for two months.

According to Terry, Tracy is hearing impaired and has three children, Christopher being the youngest.

When they were younger, the children were placed in foster care, Terry said, and Christopher’s father was later granted custody of him before moving to Panama.

Christopher grew up outside of the U.S., and later he contacted Tracy and her side of the family.

Terry told Christopher that if there was ever anything he needed she would be happy to help – and having not had in-person contact with his mother for around 15 years, he and Terry decided to make a journey to the U.S. work.

Each week Tracy and Terry’s family hosts a big dinner in their backyard, and so this provided the perfect opportunity for Christopher to surprise his mom.

Terry’s husband, John, collected the 18-year-old from a nearby airport, and when they arrived, everyone knew what was coming – except Tracy.

The family later shared footage of the emotional moment on TikTok and Facebook.

Tracy said: “When I saw my sister’s face, I melted.

“She deserves this and so much more for everything she has had to endure through life.

“I saw the light in her eyes reignite – it was amazing to hear her say “My baby” repeatedly, knowing that she has prayed and cried for this moment for many years.

“Our family is so excited Christopher is here and calls come in daily asking how he is doing.

“I hope that people never give up on finding that lost person.

“They may be looking for you too.”