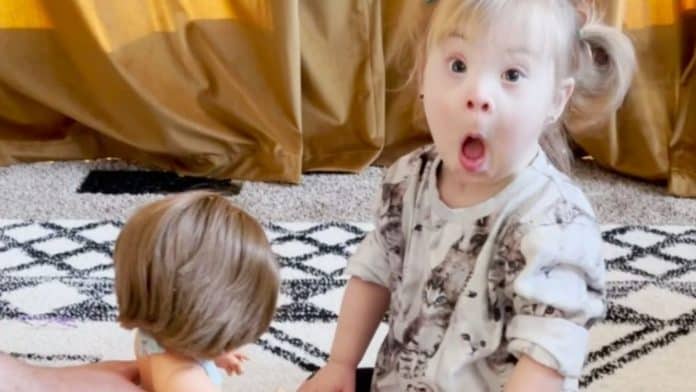 A girl with Down syndrome has gone viral thanks to her wholesome reaction when receiving a doll that looks just like her.

In the beautiful footage – viewed more than seven million times across social media – Olive Mohlman, aged two, is given a box containing a doll specially designed by her mom.

As she opens the gift at home in O’Fallon, Illinois, she pulls out the doll with much excitement, and having examined her new toy, she puts it into a standing position with the help of her dad.

She then looks at the face of the doll while letting out an “Oooooo,” giving it back pats and kisses after she had brought the toy in for a hug.

It was this part of Olive’s second birthday surprise, filmed on March 5, that mom Kimberly, 39, decided to share on social media.

Kimberly revealed when she was 11-weeks pregnant, doctors gave the family a 95 percent chance that Olive would have Down syndrome.

And she said since Olive was born she’s brought nothing but joy to her family’s life, calling the toddler their “fighter baby.”

Through her social media, which has more than 65,000 followers, Kimberly posts footage of Olive’s day-to-day life – where she loves to crawl, climb stairs, speak in sign language, and build up her vocabulary.

It is through this channel that Kimberly hopes to share Olive’s joy with the world, and also encourage others who might have children with Down syndrome.

Speaking of the moment, Kimberly said: “I was such a proud mom seeing her reaction – you could tell she loved it so much.

“Her little surprised reaction was so cute then I cried happy tears and my heart just burst with joy when I saw her do the back pats.

“The response has been beyond supportive and overwhelming – everyone loves her so much.

“We obviously think the world of her and are so obsessed.

“I started TikTok to show her journey and to spread some positive and funny things since the world is a bit crazy. “I think it’s the perfect video because it makes people smile and cry tears of joy – we need more of that during these stressful times.”