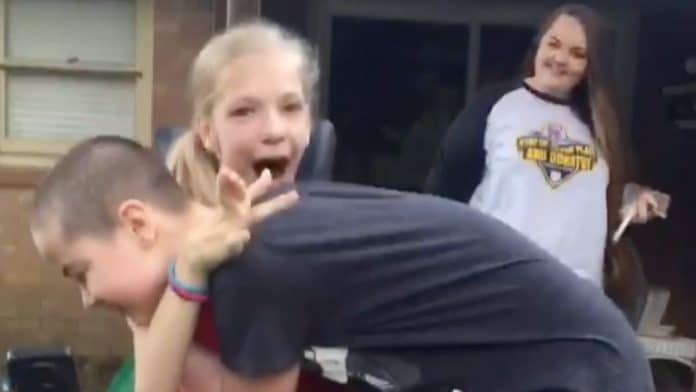 A girl with cerebral palsy let out a shriek of joy when she was surprised by her best friend who she hadn’t seen for four months because of COVID restrictions.

Megan Milam, 13, from Tyler in Texas, is non-verbal so communicates with her best friend, Michael Pile, 12, through a modified version of American Sign Language (ASL).

Megan’s mom, Amy, is best friends with Michael’s mom, Sarah, too – but for months the kids and parents had to go without seeing each other.

Amy said this period was tough for Megan as she wasn’t aware of the changes going on in the outside world, and not being able to see others was making her depressed.

That all changed, however, when Amy and Sarah decided it was time to help Megan, who was beginning to question if she would ever see Michael again.

As Megan sat in her backyard and her mom recorded her on her phone, Michael and Sarah came out of the house behind Megan.

Michael then shouted “What’s up Megan?!” causing her to jump before screaming with excitement, coming in for a hug with Michael and then Sarah.

Watching her daughter’s reaction, on June 12, Amy said she was so happy to see Megan smile again.

She added: “Michael understands Megan in ways nobody else does.

“He enjoys his time with her as much as she does, and Michael is very special to her because of their bond.

“With him, she’s always laughing – she calls him her brother.

“I genuinely hope anyone watching the joy on my child’s face understands that people with special needs have beautiful spirits and minds and hearts.

“We aren’t so different that we can’t bond with one another the way Meg and Michael have.”