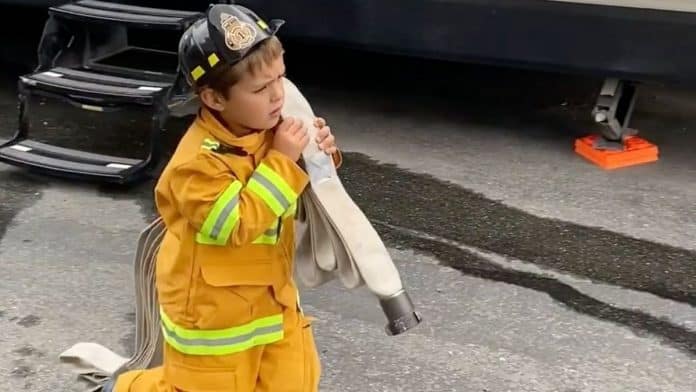 A five-year-old boy has is following in his firefighter father’s footsteps by running a series of fire drills in and around their yard.

In the wholesome footage, Tab Key III can be seen using a hose to knock down a stack of cups, crawling under objects, carrying a chainsaw and, of course, climbing a ladder.

Tab’s father, Tab Key II, 34, is a firefighter with the Anchorage Fire Department in Alaska, and due to COVID-19, his son has been homeschooled in recent months.

As a result, Tab and his wife Hannah, 29, wanted to think outside the box and present Tab with a challenge that was not on his curriculum.

They came up with a week-long special project, for which the younger Tab – known as Tabbo – requested to “learn fire skills.”

The challenge Tab created involved as series of miniature obstacles, like the ones he used at work for the fire department’s Physical Ability Test.

Tabbo’s challenge was to complete the course and then beat a time limit that he had set himself.

Over time, Tabbo shaved off enough time to achieve his goal – which also saw his parents present him with a Kinder Egg as a congratulations for his hard work.

Tab, who filmed one moment on September 18 and has continued variations of the drills since, said: “The course was designed very similar to our fire department’s PAT Physical Ability Test.

“We had simulated fire extinguishment, crawl under chairs, chopping sled, chainsaw carrying, charged hose line drag, dry hose carry, and an up and down the ladder test.

“I’m very proud that he emulates me and my actions.

“It keeps me on my toes and motivates me to be a good role model for him.

“Also, I really enjoy seeing him work hard and push himself.”