Home Good News Not A Drill! Firefighter Proposes Using Truck, Ladder And A Lot Of... 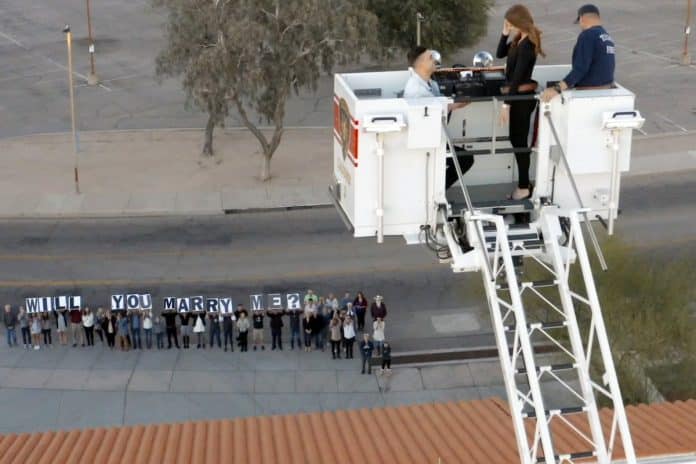 A firefighter took his relationship with his girlfriend to new heights by proposing atop his fire engine ladder’s aerial platform while family below held signs reading ‘will you marry me?’

Camryn Soria, who works for Tucson Fire Department, surprised Stephanie Hattey after months of planning with family, friends and his colleagues since they live in different cities.

He planned for Stephanie, who lives in Kansas City, to be in town and told her his Captain wanted to meet her – so they would swing by on the way to dinner with Camryn’s family.

But little did she know hidden and waiting on the other side of the station were around 40 people including 11 who had traveled from out of state.

Her mom went to such lengths to keep the surprise she booked flights to Texas on the same dates to show Stephanie – and then canceled them and used the credit to fly to Arizona.

When the couple arrived at the firehouse, Camryn – knowing he would say ‘yes’ after planning the visit with his Captain – asked if the pair could be taken up on the ladder before it got dark.

As they start to rise over the station suddenly Stephanie spots all the people gathered below holding up the ‘will you marry me’ signs and Camryn drops to one knee to ask the question.

Stephanie – clearly surprised – can be seen nodding and leans over to kiss Camryn, while his Captain holds up a sign reading ‘she said yes!’

The beautiful moment was captured on drone by Camryn’s friend since high school, Kevin Maseman, who shares his work online @masemanphoto.

Camryn said: “A lot of planning went into it – 40 people involved, 11 from out of state, a ladder truck and fire crew, the drone, a post-engagement party and a fake itinerary of what we were going to do while Stephanie was in town.

“In order to pull off my plan, I needed to confirm with the Captain and firefighter crew, they were on board and we planned for a time to do a mock trial run which worked out perfectly.

“I then had to figure out how I was going to get her family and friends out there to be a part of it and celebrate with us in Tucson.

“I sent out a long message inviting everybody in hopes the earlier I let them know, the more time they’d have to plan which was risky as four months before the engagement and 40 people involved I thought somebody will slip and accidentally say something but nobody did.

“There is no keeping secrets or trying to hide anything from Stephanie – she will find out. So I asked her mom to have an actual destination, airline, and flight departure in mind for when Steph would wonder why they were going out of town the same time she was.

“They went as far as far as actually purchasing flight tickets to Texas just to be able to print them out and have them on the table for her to see – they then cancelled those flights immediately and ‘banked’ the money knowing they would be traveling again very soon.

“I had my mom send both Stephanie and I a message saying while she was in town and the rest of my family were here she wanted to do family photos – I did this to get Stephanie dressed how she would want to be dressed for engagement photos.

“Then one week before the proposal, I had to come up with a little white lie and told Steph my Captain asked why he hadn’t met her yet and asked me to bring her by the station.

“So I asked her if it were okay if we went and did a station tour and introduce her to my Captain for 30 minutes before going to family dinner.”

After setting everything up and making sure everyone had arrived into town okay, all that was left was for Camryn to pop the question.

The firefighter added: “I had everybody hidden in a room on the opposite side of the station so I drove to the back and had my Captain meet us with the ladder truck already parked on the back pad.

“After making the introduction, I said to my Captain “Hey Capt., do you think since the ladder truck is pulled out already you guys would be willing to send us up in the bucket before it gets dark?”

“As we went up she saw the drone and at this point, between me stuttering my words and the drone flying behind my head she knew what was going on.

“She smiled the brightest most beautiful smile and said “you’re okay…” I was able to pull it together some at this point, but She still wasn’t ready for the biggest surprise as the bucket reached up and over the building.

“Her reaction when she sees the signs “will you marry me?” melts my heart – she was legitimately surprised. I got down on one knee and asked the biggest question I’ve ever asked.

“We looked out to everybody holding the signs and this is when she learned her family and some friends were there for the entire thing and I got her!

“She almost started to tear up and had to throw her head back to prevent the drop of a tear.

“It was a beautiful moment and a memory I will cherish forever. I now get to marry and spend the rest of my life with the most beautiful human being I will ever know.”