Home Good News Father Bursts Into Happy Tears When He Receives A Cap Of His... 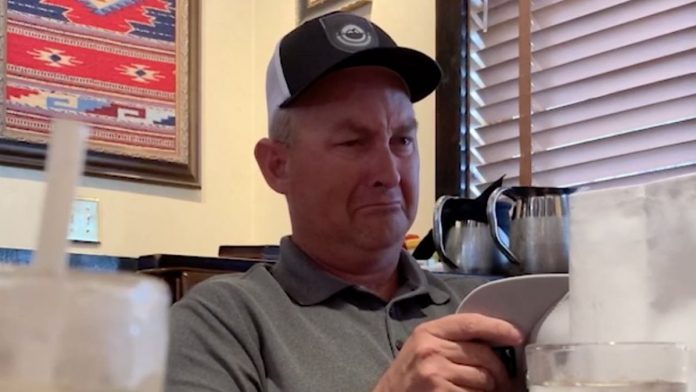 A grandpa-to-be burst into happy tears when his daughter revealed her pregnancy news to him on a personalized hat of his favorite football team.

As Del Wallace, 52, sat in the steakhouse in Bevercreek, Ohio, he had no idea what was coming during his birthday celebrations.

To keep the big surprise a secret, Del’s daughter, Ashley Schrader, 24, purchased a birthday present that would reveal her news but would be discreet enough that her father would not initially notice.

Ashley presented a bag to Del across the table, which contained a cap tied to his favorite football team, the Ohio State University Buckeyes.

For around 15 seconds, Del admired his new gift, looking at the side and trying to pull off the tag – but he had missed one key detail.

As Ashley informed her father that the hat was, in fact, personalized, he replied, “Is it?,” and took a closer look.

When Del looked at the right-hand-side of the cap, he was met with a message: “#1 Grandpa.”

The realization hit the 52-year-old almost immediately, as his eyes began to well up and his bottom lip quivered.

Ashley, who said her “heart was racing,” wanted to record the moment on August 8, 2019, as a keepsake for her family.

But it wasn’t until this year that the 24-year-old, from Springfield, Ohio, decided to share the footage on TikTok.

Ashley said she wanted to post the clip as a way of brightening others’ days.

She said: : “As he was first looking at the hat my heart was racing because I thought he would read the text instantly and know, but it actually took him a minute, so I prompted him to look because I couldn’t wait any longer.

“When he realized what the hat meant he instantly broke down in tears – which our whole family knows and expects from him.

“Seeing his reaction made everyone emotional.

“The rest of the dinner we were simply overjoyed and all we could talk and think about was the little baby that was going to be joining the family.

“The response to the video has been so much love.

“How can seeing something like a dad finding out they’re going to be a grandpa not brighten anyone’s day?

“I know when I am having a bad day I re-watch the video and always end up with a big smile.

“My dad has always been there for my son and I, and right from the moment of this video James has had his papaw wrapped around his little finger.”