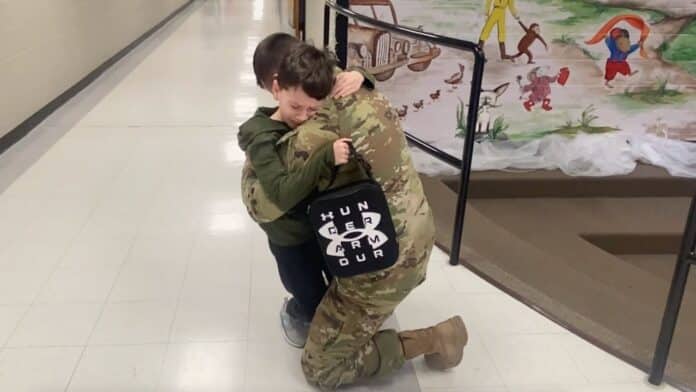 An elementary school pupil stopped in his tracks when he came around the corner of his school’s hallway and discovered his military father, who he had not seen for nine months.

Eight-year-old Gavin froze in shock as he saw the familiar face looking back at him, before running over to his father for a long-awaited hug that resulted in happy tears.

Gavin’s dad, David Masterson, 34, is a specialist in the United States Army Reserves, and for the previous nine months, he had been in Kuwait with the 811th Hospital Center out of Independence, Missouri.

Davis said he originally wanted to be low-key about the occasion, collecting Gavin from school at the regular release time.

But school faculty at West Plains Elementary, Missouri, reached out to Gavin’s mom, Tymber Thomason, and said they would like to plan a surprise for their pupil, which David went along with it.

Ahead of the reunion, David was extremely nervous, given that, including preparation for his deployment, it had been around 10 months since he had last seen his son.

When his son turned the corner, though, all those worries went away, with David saying the feeling he had was indescribable.

The moment took place on January 27, with school staff capturing the moment on video for Gavin’s family to enjoy.

David said: “Gavin seemed almost apprehensive at first – like he couldn’t believe it.

“I think he was expecting a much later date for my return.

“Once I started walking to him he ran to me and the feeling was indescribable.

“So many people are familiar with the sacrifices made by service members and their families at times like this.

“However, the message I hope others take from this is the role Gavin’s mother played in all of this.

“She truly was the glue that held everything together for him.

“She was there for all of his good days and bad days.

“She also kept me very well informed on the happenings in his life.

“She even took me to the airport on the day I had to report in, just to give him the most amount of time possible with his father.”