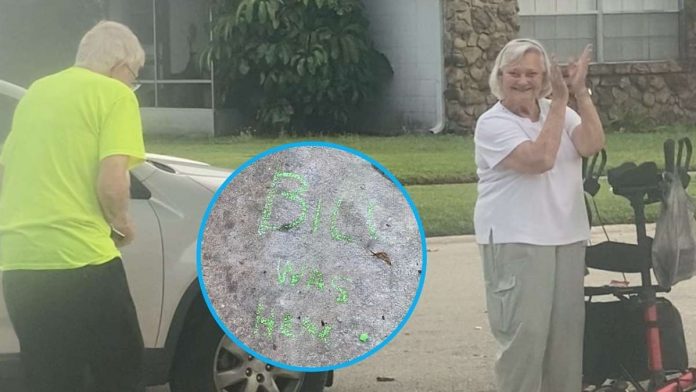 An elderly man has gone viral after he was caught on video writing wholesome chalk messages to a group of neighborhood children.

Hope Breter, 26, from Orlando, Florida, couldn’t believe her eyes when she looked out of her window and saw a man by the name of Bill leaving a message for her kids – Bentley, 5, Porter, 3, and Scout, 17 months.

Most days, Hope’s children write chalk messages on the sidewalk outside their home, such as “Be Kind” and “Have A Good Day.”

Then, one day, as the kids were inside and winding down for the night, Hope noticed her neighbor, Ms. Virginia, and her friend Bill stop to admire the drawings.

Bill then picked up a piece of chalk and wrote next to the uplifting messages, “Bill was here.”

After the initial message was left, on April 19, the children decided they wanted to write Bill a message back, and so they etched “Hi Bill, we love you!” onto the sidewalk the following day.

It had rained that day, Hope said, so she wasn’t sure if Ms. Virginia and Bill would come past for their evening walk.

But, sure enough, the pair came past later on, and Bill, clearly moved by the gesture, stopped to take a photo of the Breter children’s loving message.

By pure chance, Hope captured both Bill’s initial message and his reaction to her kids’ message on camera.

When she later shared the clips online, they soon went viral.

According to Hope, a few weeks after the interaction she spoke to Ms. Virginia, who, she said, informed her that Bill lives away and has been coming to Florida to visit her one month each year since his wife passed.

Ms. Virginia and Bill, who is believed to be in his 90s, are best friends, Hope said, and her neighbor also heads to visit Bill for one month a year, too.

Hope, speaking on Bill’s reaction to seeing the message for him, said: “Bill took out his cell phone and fumbled with it for a minute before taking a few pictures of the drawings.

“It definitely warmed our hearts, and you could tell it warmed Ms. Virginia’s heart too.

“The kids were happy that someone enjoyed their drawings.

“I would love to see other people leave chalk messages for their neighbors.

“It may seem so little, but it can really brighten up someone’s day.

“If chalk messages aren’t your thing, I definitely encourage small words of encouragement and kindness to strangers.  “You never know what kind of day people are having and even the smallest kind phrase can really turn someone’s day, or maybe their life, around.”