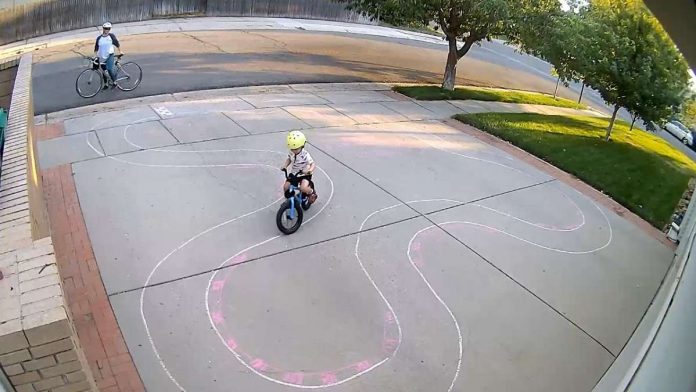 A man who received multiple alerts from his security camera after a young boy kept cycling on his drive has gone viral after creating a chalk driveway racetrack for him to follow.

At the height of lockdown, Dave Phoxe, from Salt Lake City, Utah, received alerts each time the boy in his neighborhood would veer the sidewalk and head up his driveway on his bike.

So, Dave, 47, decided he would do something about it – and so armed with a box of chalk drew the outline of a racetrack including hairpin chicanes and signs encouraging riders to slow.

As the boy went past, Dave noticed he opted to ride their bike around the track, and so each time wind and rain washed a track away, Dave replaced it with a new one.

Before long multiple kids – and even adults riding bikes or pushing strollers – joined in with the fun putting their skills to the test round Dave’s awesome driveway racetracks.

After uploading the video to his YouTube channel CanyonChasers, with a playful caption about how he deals with kids playing in his driveway, it quickly went viral with millions of views and thousands of comments praising his work.

Dave said: “I’m a little embarrassed to admit how excited I was to see how he reacted – the video is just so cute I think he did five laps that first night.

“You can see that mom notices the track outline first and you can tell she’s explaining it to him, and even at the distance you can totally see when it clicks, and he goes for it.

“A little bit of joy goes a long way – we’re all quarantined, we’re all frustrated and tired, wouldn’t we all be just a little bit better off if we just went for a bike ride and remembered what it was like to be a kid, even if just for a few minutes?”

A neighbor whose son frequently rides around Dave’s driveway racetracks said: “We think it’s amazing that he would go to that effort to make a surprise racetrack for a kid that he’s never met.

“Each time the track gets washed away or wears down, our son is always excited to see what Dave has chalked out next.

“We can’t go for a ride around the neighborhood without stopping by to give it a lap or two, he’s had so much fun with it.

“For a while during the peak of things being shut down and us being isolated we were going on about four to five bike rides a day, just to stay sane.

“Having some new obstacles to ride through kept things even more fun and exciting.

“We hope others can use this as a reminder to take a step back from the normal day to day that’s been so stressful for us all, and see the positive in the world.”