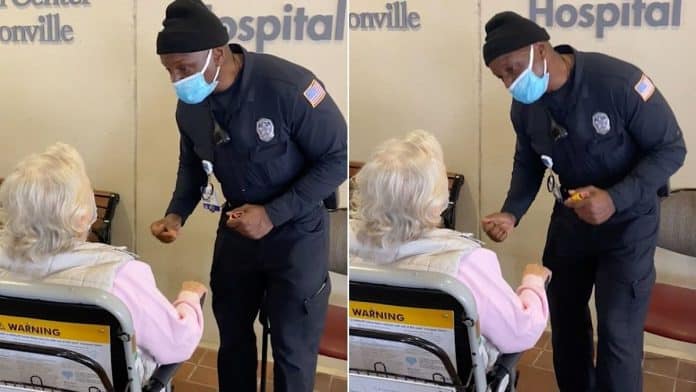 A singing hospital security guard left one elderly patient in floods of happy tears as he serenaded her with a Nat King Cole classic to brighten her day.

Esther Lindell, 87, was visiting the Baptist Medical Center in Jacksonville, Florida, to get the all-clear from a cancer scan on March 12 – but she had no idea what was about to come next.

As Esther and her daughter Cindy Hamilton, 63, were leaving the facility, security officer Lorenzo “Fig” Newton, 60, approached them to say that they were heading into an area that was for employees only.

Cindy informed Fig that she had been working with the center’s communication department since March 2020 due to COVID, and so Fig decided to approach Esther and simply began to sing.

His song of choice was “L-O-V-E” by Nat King Cole, which he sang along to and clicked his fingers as Cindy recorded on her cellphone.

According to Cindy, the gesture made her mother’s day, as she cried the entire way home.

Fig would often sing around the house as a child, he said, and when he returned from serving in the Marines overseas, his mother heard his now-developed singing voice for the first time.

His mother was shocked and he has since used that confidence to sing to others in small bursts, hoping to brighten their days also.

Cindy said that although Fig is very shy, she wanted to share the video of him singing to her mother so that his kindness could receive some recognition.

Speaking of the moment with her mother, Cindy said: “It made her day.  She cried and then cried the entire way home – tears of joy.

“I think she was thrilled to be out and the fact that the security guard sought her out and gave her attention really made her day and she felt special.

“She thinks he may be an angel from heaven that God sent to her that day.

“Remember we are all people and everyone likes to be cared for and given attention, especially during these times of COVID.

“Compliments lift spirits especially for older people or those who have been isolated or sick.”

Fig said: “I love to sing to patients.

“In this healthcare environment, we see a lot of people who are poor in spirit.

“Many of the team members will hold someone’s hand or sit and listen to them.

“God gave me the gift to sing, and that is what I can do to lift their spirits.”