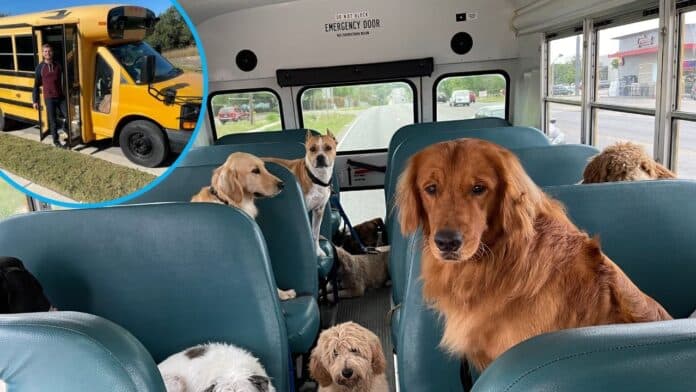 A doggy daycare in Texas has gone viral after its owner started sharing videos of how excitable pooches are to take a school bus to and from his center.

Evan Zwerneman, 31, from Austin, bought the bright yellow bus last year, after a number of his clients jokingly asked if he could get a real bus to ship dogs to and from his care.

Each day, Evan pulls up outside the houses in his area, where his customers dogs dart from their homes and onto the bus, where they have designated seats.

Just like kids, the dogs have friends on the bus, and seeing it pull up immediately lets them know they’re heading for an adventure.

A few customers started sharing videos with Evan, who then posted them on his Instagram account, receiving a viral response.

Evan said such positive feedback has been extremely positive, as he has always aimed at growing his business organically, rather than paying for ads.

He launched the company in 2019 with just one vehicle and himself.

Today, Evan’s company has five full-time employees and five “Dog Buses” – though only one is a large, traditional yellow school bus; the rest are vans.

Speaking of the reception his bus has received, Evan said: ” The dogs absolutely have friends on the bus and it makes our day watching them run happily to the bus to see us and their friends.

“They know they’re going to have a day of fun and adventure.

“People are obsessed with the bus! I get a lot of looks on the road for sure.

“I have been doing this for years and am often called the dog whisperer.

“I managed a veterinary clinic prior to launching this business so I’ve always known I wanted to work with animals and somehow it quickly became my passion and career.”