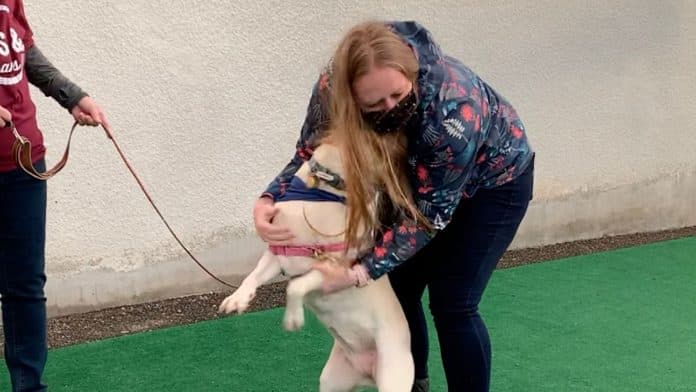 An excitable Labrador could not hide her delight, as her military mom returned from deployment just in time for the holiday season.

Joy Nameth is a lieutenant in the U.S. Navy, and in the past, she has been deployed to Bahrain twice – once for six months and another for eight months.

Such travel can be tough on Joy’s pooch, Sadie, 9, so for her most-recent deployment, Joy reached out to Dogs on Deployment, which specializes in finding temporary homes for military members’ pets.

For her most-recent deployment, Joy, who lives in Colorado, was swiftly called to serve on the USS Makin Island, which saw her leave home for around two months.

And within 24 hours of posting a listing through Dogs on Deployment, Sadie had already found a temporary home.

When the lieutenant returned, on November 8, Dogs on Deployment also helped plan a reunion with Sadie, in Oceanside, California.

With Joy waiting outside, Sadie was walked toward her owner on her leash.

As soon as she caught sight of Joy, Sadie immediately recognized her.

The 9-year-old Lab then wagged her tail with glee while jumping all over Joy.

Joy said: “I was so excited to see Sadie and it made me so happy to see her light up as she realized it was me standing in front of her.

“She acted like a puppy again and could barely contain herself.

“Friends and family have loved seeing the video and are so happy Sadie and I have been reunited.”

Story courtesy of Dogs on Deployment via T&T Creative Media