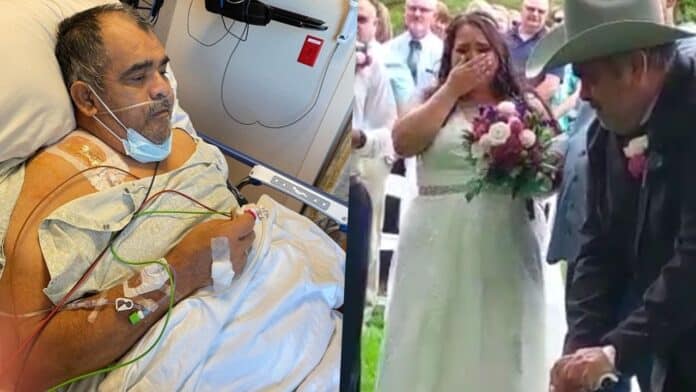 A hospitalized dad battling a series of health issues brought his daughter to tears of joy on her wedding day after leaving hospital early to surprise her and walk the final steps with her down the aisle.

Talia Lau, 29, didn’t expect her father, Ricardo Costilla, 58, to be able to make her big day, but as she made her way down the aisle, she clocked a familiar face sat in one of the seats in the front row.

The loving father then approached his daughter, helping her take the final steps towards her partner, Rachel Lau, 28, who was waiting for her at the altar.

Ricardo suffered two strokes back in 2020, and since then he has been in and out of hospital for a number of surgeries and long stays.

The Monday before his daughter’s wedding – which took place on June 6 in Valders, Wisconsin – Talia received a text from her mom, saying her father was sick but that he refused to go into hospital because it would mean missing the occasion.

Talia replied, saying, “TAKE HIM,” which resulted in doctors discovering Ricardo’s kidney functions were at just seven percent, and he needed emergency surgery to add a port for dialysis treatment.

Over the days that followed, Ricardo asked doctors if they could do all they could to make sure he made it to his daughter’s wedding.

According to Talia, Ricardo then received a text from his doctor at 6am on the day of her wedding, reading: “Ricardo, I could not sleep last night!!! I’d feel so guilty if you missed your daughter’s wedding.”

Ricardo underwent four hours of dialysis that day, before traveling two and a half hours in a car to arrive at the venue 30 minutes before the ceremony.

“But when my mom wasn’t walking out to the aisle, I was freaking out – and then I saw my dad’s cowboy hat and I gasped.

“He hasn’t been able to walk long distances since his strokes, but the steps he walked me down the aisle meant the world to me.

“I spent the week of the wedding crying about him not being there, so it was the best surprise.

“When I hugged him, he whispered in my ear, ‘You didn’t think I’d leave you did you?”

“I sobbed because I was so hopeful the entire time that he wouldn’t leave me.

“I’ve gotten so many messages from people who don’t have their dad in their lives anymore, talking about how happy they are that he was there for me – I cry at every one.”