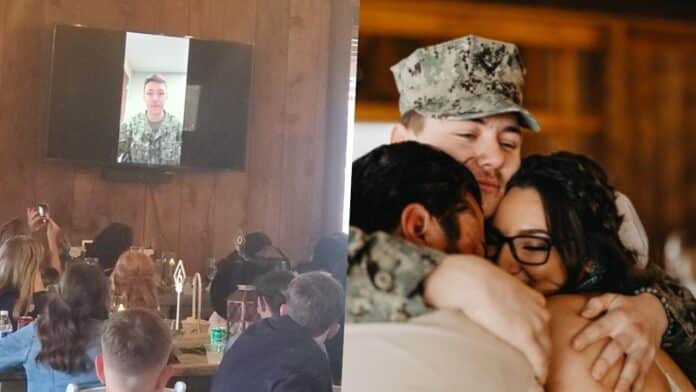 A groom was left sobbing while watching a video message from his military brother who he thought couldn’t attend the wedding suddenly walks off-screen and into the ceremony to surprise him.

The shock arrival took place after groom Tommy Stout, 23, innocently watched a video recording of his brother Timmy, 19, who he had not seen for months because of his service with the U.S. Navy.

Timmy, an airman, headed off to training in August 2021, one month after a bachelor party where he said to himself that he was determined to make it home for Tommy’s special occasion.

Once he got the news his leave had been approved, Timmy began working on the surprise.

He recorded a faux “Wish I Could Be There” message, which played during the speeches to a room filled with family and friends.

Then, as Timmy’s video message said “If you’d excuse me” he rose from his chair and walked out of shot – before appearing from a nearby door for a long-awaited hug with his brother.

When Timmy’s dad, Ray, posted a video of the moment on social media, his family received an outpouring of love, with many people thanking Timmy for his service.

Speaking of the March 19 moment, Timmy, from Bakersfield, California, said: “I was very nervous and yet very excited to see everyone I hadn’t seen in such a long time.

“I don’t think I’ve ever seen my brother cry so hard.

“It was pretty funny, but, to be honest, my heart was so happy and full, it was definitely a good reset from everything that I had been doing in training; it was a good break from the stressful environments.

“We definitely weren’t expecting for the video to go as viral, as we thought we were just posting it on social media for fun and just to put some smiles on people’s faces and bring some wholesomeness back into the world.”