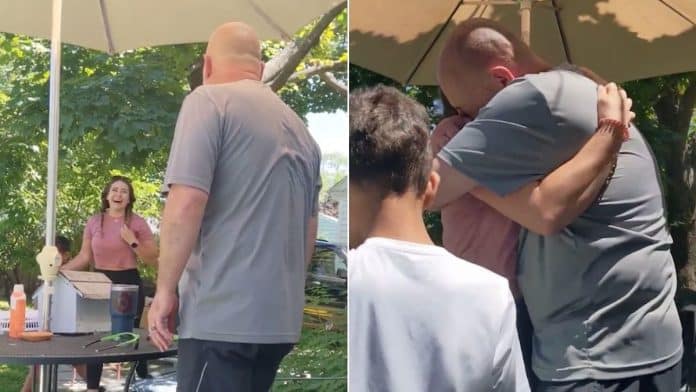 A stunned dad could not hold back his happy tears when his daughter and grandson paid him a surprise visit after six years apart.

Due to ever-changing circumstances, single mom Chelsea Forrest, 30, and her dad Douglas Forrest, 53, had not seen each other for more than half a decade before they were finally able to hug once more.

For Chelsea’s son Maddox, 8, the surprise was the first time he had been aware of meeting his grandfather, as he was too young to remember the last time they met, Chelsea said.

Over the past six years, Chelsea has graduated from nursing school twice, started a couple of new jobs, raising a child, and then seen a barrier put in between herself and her father while the coronavirus pandemic took hold in America.

But ahead of her younger sister’s June 5 graduation, Chelsea decided she would make the trip from San Marcos, Texas, to her father’s home in Eau Claire, Wisconsin, to surprise him.

Ahead of the big moment, Chelsea said that she felt nervous all day.

Then, as Douglas sat outside in his garden and his wife, Chelsea’s stepmom, secretly recorded, Chelsea and Maddow came creeping around the corner.

As soon as Douglas saw his daughter, he shouted a loud “WHAT?!” and then looked into the camera as his face began to well up.

He and Chelsea then shared a tight embrace, six years in the making, as he bawled happy tears on her shoulder.

Chelsea said: “I felt a rush of emotions.

“I felt anxious the whole day before we got there.

“My son talked about it for weeks before we went!.

“He was so excited to see his grandpa and surprise him and my dad was thrilled to be able to hug his grandson in person and be with him.”