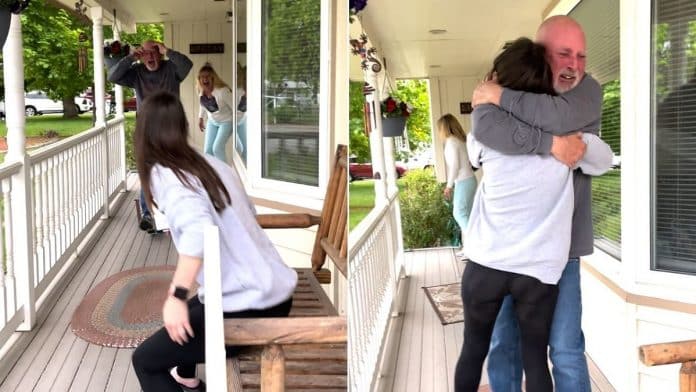 A beloved dad has warmed hearts online when his daughter surprised him after nearly three years apart and he couldn’t stop crying for hours on end.

In the heart-warming video montage, Jordyn Rassi, 26, initially snuck up onto the porch of her father William Nutting Jr.’s home in Spokane Valley, Washington.

There, Jordyn waited with her husband, Tyler, as William, who goes by JR, headed outside.

As soon as he caught sight of his daughter, JR, 59, screamed “OH MY GOD! OH MY GOD!” and threw down his hat and glasses in shock.

He then darted across the porch to give Jordyn a huge hug, sobbing on her shoulder.

The fun, however, didn’t stop there.

After their initial hug, Jordyn recorded her father’s ongoing shock at the surprise throughout the day.

First, she captured him weak at the knees, leaning on the porch fence as he continued to cry happy tears.

Then, Jordyn captured her dad in his living room, the kitchen, and even at a restaurant – each time the moment would hit him, and he would be required to wipe away tears once more.

The surprise took place on May 22, and before that moment, Jordyn, who lives in South Bend, Indiana, had not seen JR since August 2018.

According to Jordyn, the separation was caused by a number of factors including work scheduling, unforeseen medical bills, and then the COVID-19 pandemic.

Speaking of the reunion Jordyn said: “I was super excited to see him again since it had been so long, but I was also excited to see his reaction — I know my dad and knew it would be priceless.

“I was so incredibly happy.

“It was even better than I imagined, and I’m so glad we caught it on camera.

“It’s a memory I will treasure forever.

“He is very emotional, so he definitely cried a lot of happy tears.

“He had welled up and gotten excited all over again a few times before I started recording his reactions again.

“They were too priceless not to – and this went on for the rest of the night.

“He would be in the middle of something and look over at me, or I would leave the room and come back, and he’d either start to well up again, say something like ‘There’s my daughter, she’s really here!’ to my stepmom, or just point and smile in disbelief as my stepmom and husband watched.”