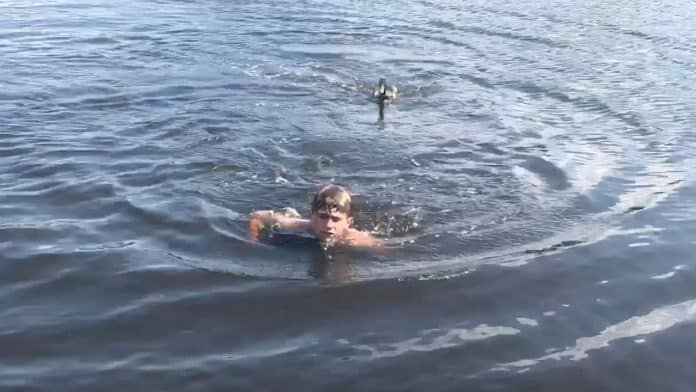 A family fall about in hysterics as a boy is chased around a lake by a very territorial duck pecking at his feet.

Monica Tindall filmed her son Grant Taylor, 14, as he leapt into the water near their home in Rusk, Texas, USA.

But almost instantly the family’s pet duck George appears from out of shot, dives into the water and surges after Grant.

Realising that George is unhappy at sharing his lake with a human, Grant attempts to swim away – only for the speedy duck to dive under the water repeatedly and nip at his feet.

As Grant cries for help, his family can’t hold in their laughter.

Eventually, Grant manages to circle back and jump out of the water – but not before George gets one final peck in.

Dad Shawn, who was watching from the jetty, said: “We have had George the duck since he was just a few weeks old and he roams freely on our 150 acre property.

“He loves following us everywhere we go, but the pond is clearly his territory and his alone.

“It was a hot day so we went down to the pond and Grant thought it would be fun to jump in.

“Grant got pecked a few times but no harm was done. He’s not returned to the water since, but we have gone fishing and George swims alongside us as if to say don’t come into the water!”