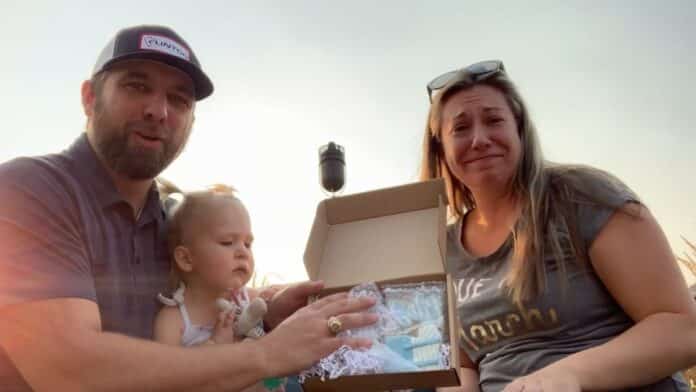 A couple sent cookies that revealed the gender of their baby to family members and then captured their emotional reactions.

Jera and her husband Charlie Brackman from Aurora, Colorado, are expecting their baby on March 1st, 2022.

Sadly, in July this year, Jera lost her brother Kyle and never had the chance to tell him she was pregnant.

Due to this tragedy, alongside precautions around the pandemic, Jera believed it wouldn’t be right for her parents to host their gender reveal party.

Instead, Jera and Charlie opted for a remote gender reveal by asking their friend Karla to deliver cookies to each family member revealing the baby’s gender.

The couple also requested that each family open their box of cookies and film their reaction so they could create a video to have as a keepsake.

But, when the boxes of cookies were sent out a hurricane delayed the delivery. But even though this meant the cookies arrived late they arrived on Jera’s late brother Kyle’s birthday.

When each family opened their box, they were presented with a cookie revealing that the couple are having a baby boy.

Jera said: “With this being such a fragile time in my family’s life, regardless of whether or not it was a boy or girl, a baby is a blessing and I just wanted everyone to have a personal 1 on 1 moment with my husband and me.

“I was beyond excited, and it was very emotional after finding out that it was a boy – I knew it would be extra special for our family and it was just that.”

Charlie said: “I was overjoyed to see how excited everyone was for us.

“Definitely a lump in the throat kind of moment.”

Jera’s parents Jerry and Pam Dougherty said: “It was such a blessing to have had a son of our own, but we get to look forward to having a grandson, this has been very emotional after losing our son Kyle so tragically and with him not knowing the news, especially because our family unit is so close.”