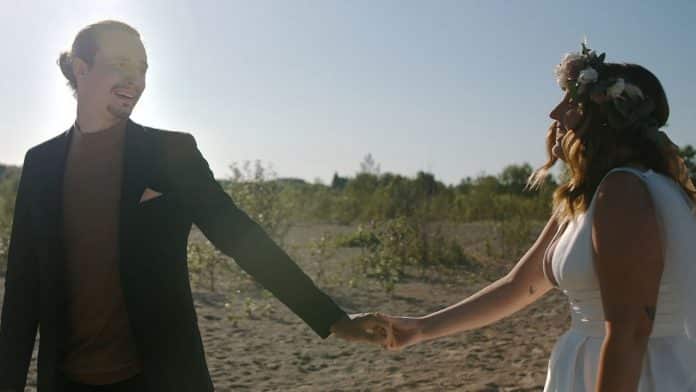 A couple who had not been able to touch for 84 days because of the coronavirus pandemic were emotionally reunited and held hands for the first time on the morning of their wedding day.

Things changed rather rapidly for 21-year-olds Nikita Hundt and her then-boyfriend Peter Brown, who had planned a wedding at the end of summer but were forced apart because of COVID restrictions.

At the start of the pandemic in 2020, Nikita’s sister was about to have a baby who would require surgery a few days after she was born due to health issues.

As a result, Nikita and her family, from Kitchener, Ontario, decided to isolate – “no one in, no one out” – but because Peter was an essential worker, he remained separate from his girlfriend.

The couple made dates through the likes of FaceTime calls, but after a couple of months, they still had not made physical contact.

Their wedding was originally planned for September 24, 2020, but with that no longer looking like an option in early summer, they decided to move the date forward to June 8, 2020.

According to Nikita, restrictions meant they were only allowed five people present, and so she and Peter picked a pastor and two videographers, Jon and Meg of Bonsai Creative.

For their first in-person meeting, they decided to do their own pandemic-style first-look shoot – in this case, a first touch, filmed in a remote location on a series of sand hills.

With the cameras rolling, Peter stood with his back to Nikita as she walked toward him in her wedding dress.

The 21-year-old then put his hand back so that his wife could hold it, immediately welling up as he turned around to make eye contact.

After the moment, the couple then went about saying their vows to be officially wed.

READ MORE LIKE THIS: Bride And Groom Shave Heads At Wedding In Solidarity With Bride’s Mom Battling Cancer

The moment was later shared by Bonsai Creative on the company’s YouTube channel.

Nikita said: “Mostly everyone starts their response to the video by telling us they cried.

“I still cry every time I watch it.

“It had been 84 days since we last touched. He reached his hand back and we held hands for a moment.

“A brief moment, yet an eternal bliss.

“The bridge between being apart and starting a new life made us closer than ever before.

“Through lots of tears and more smiles we walked, although it felt like floating at the time, with our pastor over to the wooden structure where we could do the ceremony and vows.

“In such crucial moments of our relationship, not being able to be together and touch was very challenging.

“But the reward of finally being able to touch again was worth it.

“Having the moment of being together again truly be the start to our marriage was so special to us.”