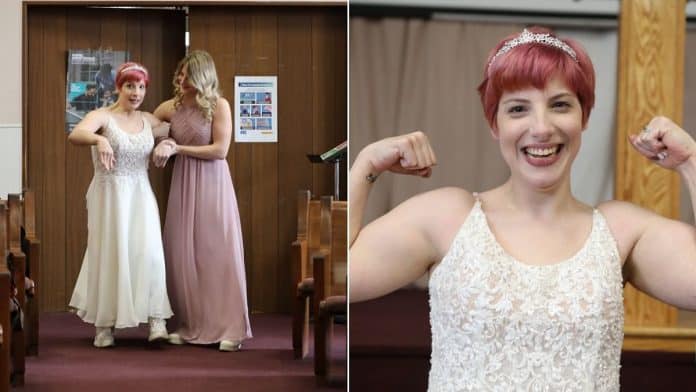 There was not a dry eye in the house at a recent New York wedding, as a bride who was born with Cerebral Palsy surprised friends and family by standing on her own two feet and walking down the aisle.

Tears flowed as Kaylin Corbran, 28, from Buffalo, New York, entered the church, her walker nowhere to be seen as she stood next to her twin sister, Kristen, before starting to make her way to the altar.

The moment had been years in the making for Kaylin, whose family had never seen her walk unaided – part of a series of long-term goals she had set herself.

Cerebral Palsy, a nervous system disorder, affects everyone differently, and though her motor coordination is fine, Kaylin’s balance and lower extremities have been impacted by the condition since birth.

At age 10, Kaylin and her grandma, Fran, visited an orthopedic doctor, who told her that if she could not walk by 12, it was unlikely she ever would.

Two years later, Kaylin’s legs became contracted due to muscle tightness, requiring her to have surgery to lengthen and strengthen them before she began using a walker.

Having built up strength with her walker, Kaylin set herself a number of goals: walking to get her high school diploma with just one crutch; heading to the gym for the first time; learning to stand without losing balance; completing a squat.

In 2013 she started exercising and undertaking strength training, before she started working with a personal trainer, Trey Torrey, in 2017.

READ MORE: Three-year-old With Cerebral Palsy Told She May Never Walk Plays in Snow for First Time Thanks to Ingenious Idea of Adding Pool Noodles to Her Walker

Along with the help of her physical therapist Jimmy McMullen, Kaylin was able to get to a point where she could first rise to her feet unaided, then to do a squad, and then add weights.

Having worked on her balance, Kaylin was ready for the big day, at North Buffalo Community Church, on March 6, where she married Christopher Devealt, 29.

As she entered the room on her sister’s arm, those looking on welled up with emotion.

Kaylin’s next long-term goal is to walk independently without her walker, and having completed eleven 5K races using the support, she hopes to one day finish a half marathon, too.

Speaking of her wedding, Kaylin said: “When I started walking, I just started feeling all this emotion, because it was the first time I was ever doing it.

“To know that nobody really knew this was happening, too – I had happiness. I was so emotional.

“It was a mix of emotions, but all got good ones.

“To know that I’ve got that far… I can’t really explain it.

“But, I think, when people see a story like this, it gives them hope to not give up.

“All things are possible with faith, determination, and a positive attitude.

“Not everyone is going to believe in you, so stay silent and humble. Prove it with your actions.”