Home Good News Copycat Toddler Douses Room With Diaper Cream In Bid To Be Like... 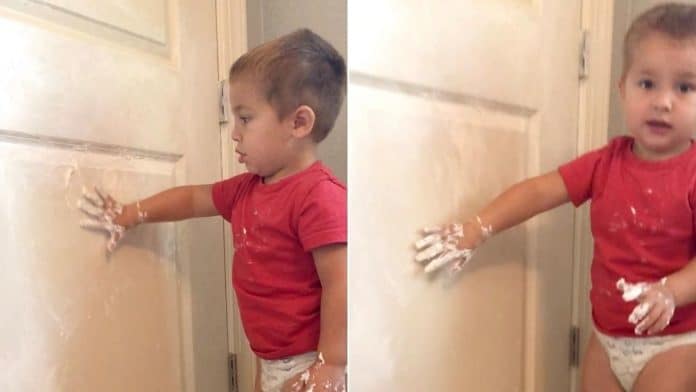 A copycat toddler whose father is a painter was caught red handed copying his dad by ‘painting’ his bedroom with cream.

Adorable tot Henry had opened a pot of Desitin, a nappy rash cream, and was liberally applying it to the walls, doors and crib in his bedroom.

His mom, Shelby Stites, uncovered the Desitin disaster after thinking it was eerily quiet upstairs and heading to investigate.

Upon opening the door, she discovered Henry with an open pot of diaper rash cream, which he was in the process of smearing all over the furniture.

As she asked him what he was doing, he exclaimed: “Painting”.

Henry’s father owns his own residential painting firm, and Henry has watched his dad at work many times prompting his mother to suggest Henry was copying his father’s work.

So, incredibly calmly, mom Shelby followed up by asking her son whether he was being a copycat and mimicking his daddy, to which Henry adorably replied: “Yeah!”.

Shelby, from Iona, Florida, added: “All was quiet in the house, so I knew something was up.

“I slowly made my way into Henry’s bedroom and discovered the Desitin disaster.

“Henry was very pleased with his work as it resembled his Daddy’s.

“Daddy, Alex, is a second-generation painter and owns his own residential painting company.

“He has let henry watch from the distance many times in the past, so Henry has taken a liking to the trade and seemed to be giving it a go. It was a really funny moment – but also what an adorable copycat”