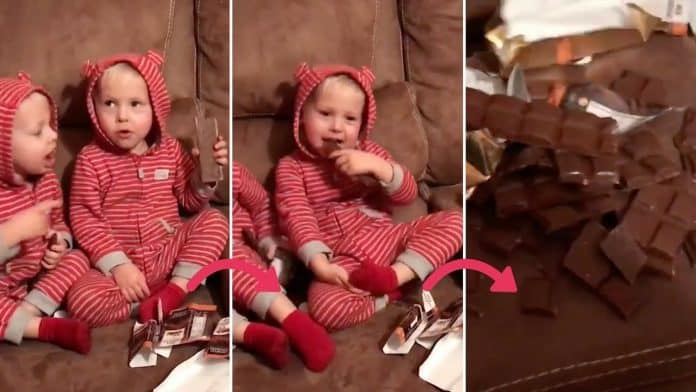 Twins have been caught red handed devouring a huge box of charity chocolates their parents left on a table.

The pair had spotted the box full of dark chocolate lying idle on a coffee table, before dragging it off to another room and tucking into the tasty treats.

After discovering the missing chocolate, Mary Beth, husband Josh and the twins’ aunt Katharine Duffield, found the duo with chocolate smeared around their faces and the leftover wrappers.

In the video, Dad Josh can be heard saying: “Did daddy say you can have the chocolate”, before one of the twins replies, “I’ll clean up!” innocently.

Mary Beth, who filmed the footage, said: “We never lack for entertainment in our household.

“We bought a box of chocolate from our nephew’s school fundraiser.

“We gave it to my sister in law when she stopped by because she loves that kind of chocolate.

“They ended up on the coffee table and we began chit chatting. But somehow the twins got it and sneaked to one of the back rooms in the house, opened it all and tried to eat the entire box.

“Our twins boys are something else.”

After the boys do their best angel eyes, both parents can be heard remarking that they have a long night ahead, with Josh saying: “They’re not going to sleep tonight.”

To which Mary replies: “Nope, we’re going to be up all night.”