Home Good News Brothers In Their 90s, The Last Of Nine Siblings, Finally Reunite After... 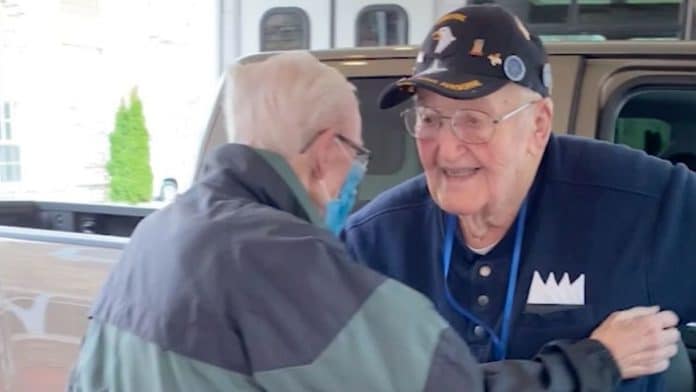 Two brothers in their 90s – the last of nine siblings – emotionally reunite after being separated for a year due to the COVID-19 pandemic.

Brothers Charles and Calvin Longest hadn’t seen each other for more than a year, depriving them of their weekly meetings, when they would go on “hot dog dates.”

Despite family members being reassured Charles and Calvin were safe, they said the separation was bittersweet, as due to the brothers’ ages it felt like they were losing a year of their lives.

But now, after been fully vaccinated, the brothers were delighted they could meet once more.

On March 23, Calvin, 90, walked out of his assisted living facility in Henrico County, Virginia, to be met by Charles, 92.

The pair, who family said are extremely close, had struggled being apart during the pandemic, which deprived them of their regular meetings and sense of routine.

READ MORE LIKE THIS: Veteran Given Surprise Reunion With Sister Ahead of Wedding Day Having Not Seen Her in More Than 40 Years

Before the pandemic, Charles and Calvin would meet once a week, when they would eat hot dogs and then go shopping at a local Costco.

Thanks to the help of family, the pair were able to stay in touch over the phone.

Speaking to a local news outlet, Calvin joked: “A whole year without a hot dog.

“I just don’t know how people make it without a hot dog.”