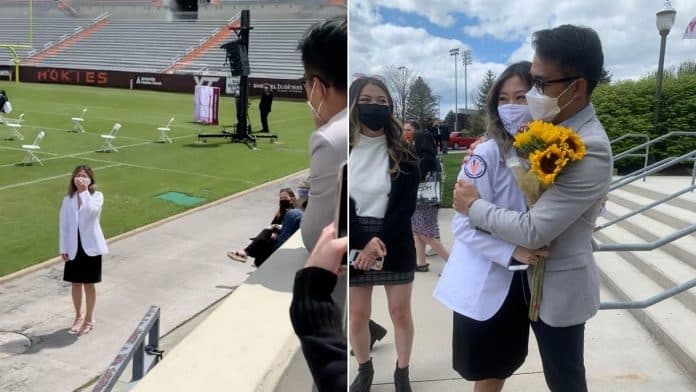 A doctor-to-be froze and began to cry as she was surprised during her white coat ceremony by her long-distance boyfriend who had traveled across the country to see her.

Raymond “Ray” An, 30, and his girlfriend Hong Ju Kim, who goes by Sarah, have been in a long-distance relationship while Sarah has undertaken her studies at Virginia Tech University.

Having completed her first year as a medical student, Sarah was set for the ceremony where student doctors are given their first white coats.

Secretly, Ray, who lives in Los Angeles, California, had been planning to attend, and the day before the Sunday, April 18 ceremony, he took a red-eye flight to nearby Washington, D.C.

From there, without stopping for food, Ray took an Uber to his family’s home, before being driven for four hours to the ceremony, where he took his place in the stands of Virginia Tech’s Lane Stadium.

As Sarah walked out, her friends cheered to grab her attention, which caused her to see Ray – who had traveled for 14 consecutive hours – leaning over the barrier and waving in delight.

Once it hit Sarah who she was staring back at, she immediately put her hand over her mouth and began to cry happy tears at her boyfriend’s loving gesture.

The couple’s friends Sydney and Jenny later shared videos of the surprise on TikTok, with Sarah’s reaction soon going viral.

Sarah has three years left in medical school and then will be off to her residency.

She said she is not set on what field she would like to enter yet but is very interested in pediatrics.

READ MORE: Military Dad Returns From Serving In The Middle East To Surprise Daughter On Stage Ahead Of High School Graduation

Speaking of the surprise, Sarah, from Fairfax, Virginia, said: “I was so happy that my family and best friends were there to share this special moment.

“I could hear each of their voices echo across the huge Lane Stadium, but never would I have thought his voice was in there.

“As I was passing by the bleachers where they were sitting, I was waving to them and then, out of nowhere, Ray popped out, saying, ‘I would never miss these moments with you,’ and that was it: immediate tears.

“The timing was just perfect.

“When I got back to my seat and found out my friends and Ray had been coordinating this the entire time, I was in such shock and awe.

“I was still crying.”

Ray said: “Honestly, it was a blur, but I knew it made her emotional.

“Seeing her emotions made me emotional as well.

“That warm, teary feeling in my chest.

“Distance is definitely a challenge in a long distance relationship, but you can turn anything negative into a positive.

“Sure we would prefer not to be long distance but this whole story became what it is because of the distance.

“Because of the hardships we face, the story becomes more authentic and it really shows the intentions we have in our relationship.

“Effort is required from both sides to make any long distance relationship work and distance doesn’t mean a thing when it comes to love.”