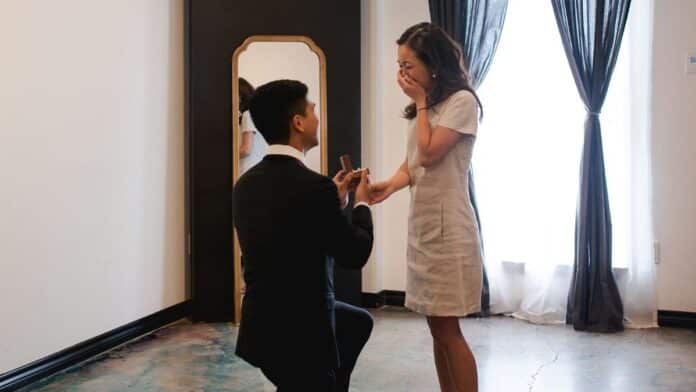 A woman who told her boyfriend that she would like to go on an art museum date got more than she bargained for when he surprised her by converting an art gallery into a display of their photographic memories – before getting down on one knee to propose.

Earlier in the year, Vivian Nguyen, 26, had told her then-long distance boyfriend, Rodney Bravo, 26, that she would like to go on a date to an art museum, but because the pair were studying in different cities in Texas, the distance made things difficult.

Fast forward to May, and Rodney had traveled to Houston, where Vivian was in her last year of pharmacy school carrying out clinical rotations.

Secretly, the loving boyfriend had hired out Select Studios Photography – a gallery in which he then mounted photographs of the couple down the years.

Vivian went about her day getting her nails done with friends before believing she was going to go on a double date to a gallery later in the evening.

To Rodney’s benefit, Vivian did not ask what gallery they were going to; she simply went along with the plan.

When Vivian arrived, she was handed a ticket by her friends Tan and Angela, which read: “Past, Present, Future: A One Night Art Exhibit of Life and Journey.”

Inside the venue on May 8, Vivian discovered a room full of photographs of her and Rodney, starting with the first photo that was taken of the two of them together.

From there, Rodney walked his girlfriend around the room, showing her memory after memory in chronological order.

READ MORE LIKE THIS: Woman Surprised With Proposal As She Enters New Home For First Time

Finally, Rodney walked Vivian into a room where there was a mirror – a masterpiece he had called “Future.”

The boyfriend then said: “You can see the countless number of years that they’ll spend together, the happy moments and the sad, the struggles but the celebrations that go along with it, the painful moments and the growth associated with it.

“You can see it all there. But this piece of art doesn’t look complete yet, it needs to find a home.

“Luckily for this artist, he knows where his home will eventually be. He figured that out three-and-a-half years ago.”

Rodney then asked the big question, before surprising Vivian with her friends and family.

Following the proposal, Rodney also planned a surprise celebration back at Vivian’s apartment.

Speaking of the moment, Vivian, who shared the couple’s story on social media, said: “I was crying so much; I had no idea.

“It was so nice looking back at how far Rodney and I have come – I loved looking at our favorite memories together.

“I was nervous and crying so much I actually don’t remember exactly what Rodney was saying, so it was a good thing it was recorded.

“I felt overwhelmed but so loved and in love.”