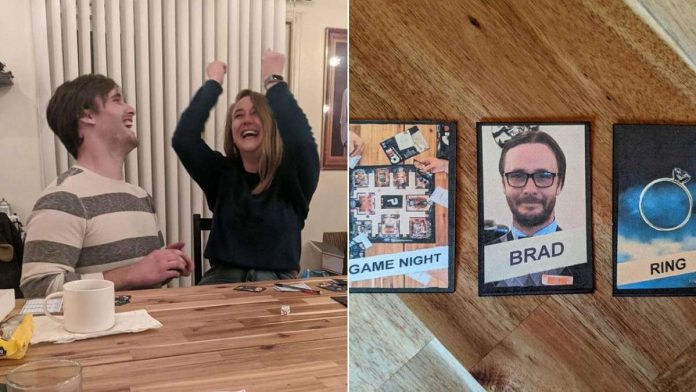 A boyfriend ingeniously proposed to his partner by rigging the cards in board game Clue.

Brad Barnette, with the help of his sister-in-law Forest Barnette, photoshopped the solution cards inside the murder mystery game’s central envelope.

Brad Barnette, with the help of his sister-in-law Forest Barnette, photoshopped the solution cards inside the game’s envelope so that pictorially they spelled out his proposal to girlfriend Kristin Laase.

Brad, whose original proposal idea of whisking Kristin to a Cinderella castle in Germany was quashed due to the COVID-19 shutdowns, had been planning the surprise for weeks.

And at a regular game night, hosted by Forest and her partner in Denver Colorado, the group played a game of Clue, a murder mystery game, with the result being revealed via a mystery envelope by the winning player.

But unbeknown to Kristin everyone was in on the surprise, secretly getting the answer wrong so it would fall to her to open the envelope.

As player after player hilariously failed to get the answer, Kristin thought her luck was in.

As she reached for the envelope in the middle to reveal what she thought was the answer – she was initially dumbfounded to see she had got it wrong.

But then suddenly after taking a closer look at the cards, she couldn’t believe her eyes as the cards revealed ‘Brad at Game Night with the Ring’ – mimicking the usual Clue cards, but for a proposal.

As a shocked Kristin took in the news, Brad got down on one knee and revealed the engagement ring.

Forest said: “Brad planned to propose to Kristin in front of the Cinderella castle in Germany during the trip they planned in March.

“When Covid-19 cancelled the trip, he was desperate to find a new opportunity to pop the question.

“He’d been hiding the ring from her for four months and complained to me that, ‘this ring is burning a hole in my pocket!’

“We texted back and forth about what qualities he was looking for in a proposal – often while Kristin was still in the room.

“As more and more things closed down due to the pandemic and restrictions only continued to tighten, so did Brad’s proposal options.

“We finally settled on a game night proposal, since my husband and I host them often and it wouldn’t seem out of the ordinary to Kristin.

“We orchestrated the event around Brad’s favorite board game, Clue.

“I worked some photomanipulation magic and printed the personalized game cards that would be waiting for Kristin in the envelope: Brad at Game Night with the Ring.

“We set up three hidden cameras before Brad and Kristin arrived that night, one of which was in the empty coffee pot directly across from where Brad & Kristin sat during the game.

“I set up the game and swapped the real solution cards with the custom ones while Kristin was sitting across from me. I don’t think I’ve ever been that nervous before. What if I ruined my brother-in-law’s proposal!

“It was critical to the proposal that Kristin be the person to open the envelope, which meant everyone else had to either pretend to be stumped or intentionally get the answer wrong.

“Waiting for Kristin to figure out the solution felt like an eternity! I had intentionally gotten out to check the order of the cards in the envelope, which freed me up to record on my phone as well.

“As she made the accusation and opened the envelope her face lit up when she finally realized what was happening.

“She later told us that as she looked at the first two cards and didn’t recognize ‘Brad’ and ‘Game Night’ as not being legitimate cards but only thought to herself, ‘Oh, I got it wrong.’

“But when she saw the ‘Ring’ card everything came together.”

Brad and Kristin, who have been dating for two years, plan to get married in April 2021.