Home Good News All He Ever Wanted Was A Family… And Then He Got The... 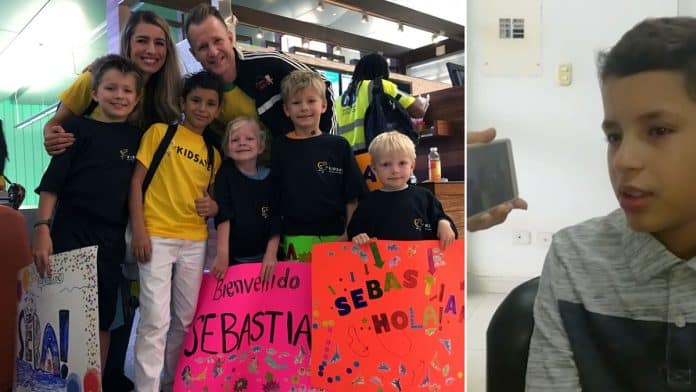 This is the heart-warming moment an orphan in Colombia hears the voices of a U.S. family he spent the summer with for the first time in weeks – breaking down as they ask him to join their family.

JoBen and Amanda Barkey, from California, USA, saw a social media post about Kidsave.org while they were on a vacation and knew immediately they wanted to adopt Sebastian, 11.

While working through the process, the couple discovered they could host Sebastian in their home for five weeks with their four children Asher (9), Judah (8), Mishayla (5) and Jameis (4).

Under Colombian hosting/adopting rules, they weren’t allowed to tell Sebastian they were hoping to adopt him – rules which they followed explicitly.

However, that meant they also couldn’t tell their own children because they knew it would be too hard of a secret to keep while Sebastian was staying in their home in the U.S.

After an emotional ‘goodbye’ at the airport when it was time for Sebastian to go back to Colombia, the children couldn’t understand why their parents were letting him leave.

But just a few weeks later, JoBen and Amanda recorded the moment they broke the news to their kids that they were going to be adopting their friend – news they were ecstatic to hear.

When Sebastian arrived back in Colombia, the family had arranged for him to start English classes but that meant moving to a new city.

The authorities decided to inform Sebastian why he was being moved – and to let JoBen and Amanda tell him – so played him the clip of them telling their children about the adoption.

But since Sebastian doesn’t understand much English, they told him they were calling a ‘translator’ only for the family to surprise him by appearing on-screen – the first time he had seen them since leaving.

One-by-one the family tells Sebastian they would like to be his brother, sister, mom and dad, before he is overcome with emotion and excitedly answers ‘yes’.

Jo-Ben said: “It was overwhelming – we had waited so long to ask him to join our family. During the summer, he was only told he was participating in a summer vacation hosting experience.

“Because our biological children are so young, we couldn’t tell them either as we were worried they might tell him – and we wanted to follow all the rules, we didn’t want anything to potentially disrupt or delay the adoption.

“Over the summer, each of our biological children came to us on their own and begged us to let Sebastian stay with us. The family bond was instant.

“They asked us why we couldn’t see that he fit in our family and why we didn’t think he should just stay with us.

“The farewells at the airport were very, very hard when we had to send him back with everyone sobbing.

“The children couldn’t understand why we were choosing to send him away, and Sebastian desperately wanted to stay.

“So, when we were finally able to tell him, there was a flood of emotion. There was so much relief because he finally knew he was going to have a mom, dad, and siblings forever.

“And we finally knew he could go to sleep at night knowing his family already loved him.

“We had wanted to tell him for so long “don’t worry, we are coming for you, we are working hard” but we just couldn’t.

“We felt it was important to make sure we phrased it in a way that we asked him if he would like to join our family.

“We’re very intentional about everything we do as parents and we wanted him to experience choosing us, just as we were experiencing choosing him. He is ours and we are His.”

Earlier this year while JoBen and Amanda were in Maui celebrating JoBen’s 40th, JoBen saw a Facebook post about Kidsave, a program that allows people to host children from Colombia who are available for adoption – either as an adopting family or as an advocate family.

He saw Sebastian’s profile, took a screenshot and sent it to Amanda who was sitting across the room from him.

JoBen added: “We both looked at him and immediately thought his profile, his pose, his smile, he looks like a combination of all of our children right down to his passion for the color green.

“On April 27, I began the process of applying to host Sebastian and that same week I began the adoption process as well – we didn’t need to host him in order to take a ‘test run’ to see if he fit in our family, we just knew.

“Our kids are so excited – it’s amazing how much all five love each other, even though they don’t speak the same language.

“They get along really well with each other and all play together every day, and Sebastian is no exception. He takes care of the youngest at every opportunity, he is always concerned for the wellbeing of his only sister and he loves wrestling, playing and reading with the two older boys.

“They are so excited to have him come and stay here forever.

“Colombia has changed some of their rules recently which limits the contact we can have with him.

“But all the rules are in place to protect the children, and we have no problem respecting them as the children’s wellbeing is the most important thing.”

JoBen and Amanda recently received government approval from the U.S. for them to sponsor Sebastian’s immigration through adoption, and are now waiting for the Colombian government to review and invite them to travel to Colombia for part of the adoption process.

JoBen said: We are really hoping all six of us can make it down to Colombia in time for Christmas which would be amazing.

“We will then spend anywhere from 3-5 weeks in Colombia as a family – all seven of us – while we finalize the Colombian side of the adoption.

“The adoption will not be complete until after we get back to the US, but we will be together as a family as soon as we arrive in Colombia.

“And he will legally be a part of our family when we finish the Colombian documents and meet with the judge down there.”

After going through international adoption, JoBen insists it’s vital for families to grasp the cost in terms of time and resource so they can understand the importance of importance of building a support group right from the start.

“If you have a clear picture of this, you won’t hesitate to ask your community to help you, otherwise you end up feeling really isolated.

“I own a small company called Soccer Shots Orange County, and through the company we financially sponsor 1168 children playing soccer in 14 academies across Cameroon through a nonprofit we founded www.petrichorfootball.com.

“It would have been very easy to just stop sponsoring them and instead spend that money on the adoption, telling ourselves and believing it was worth it for Sebastian’s sake, but we knew the right thing was to trust that if we keep taking care of those kids in Cameroon, other people will join Sebastian’s Tribe and love him with us, and help us bring him home.

“There are times you are working on paperwork for 10, 12 even 18 hours in a row and in the back of your mind you keep thinking if I can’t figure out the money, none of this matters.

“It’s an incredibly desperate place to be. For us, we thought we were going to get a very large grant, but unfortunately the grant committee turned us down because we were adopting an older child, out of birth order.

“My wife and I spoke about it and came to the realization we had an amazing opportunity to invite people in to become a part of Sebastian’s life, to join Sebastian’s Tribe.

“I messaged so many people on Facebook over the next 24hrs they shut my account down for a while – we realized we had many friends who would love to be a part of this story, but maybe didn’t have the resources to financially contribute.

“So we decided to be very careful about only asking people to share our GoFundMe page.

“We have had so many friends reach out and thank us for letting them be a part of this Love Story through sharing – it’s been amazing.

“Every Share has been so encouraging. Most people who share our story, include a personal message about our family and about Sebastian and it really encourages us to read through those posts during some of the harder days.

“If you share how the process is going, it gives people an opportunity to engage and be involved. Sometimes our pride gets in the way of asking people for help but it costs nothing for people to share your story, it’s a mistake not to invite them into the Tribe.

“One of my friends is a pilot in Africa, he shared our story and wrote about how he was breaking his “no share rule” because he loved the Story of Sebastian so much.

A friend of his who we have never met saw the story and was in a position to help us pay for some of the fees. There have been so many amazing stories like that.

“How cool will it be for the next 5, 10, 15 years to introduce Sebastian to so many people and say “Sebastian, I want you to meet my friend he/she loved us and helped us bring you home.

“Anything contributed beyond the adoption costs will go towards a college fund for Sebastian.

“After that, he has three friends who are being adopted by people who all live within an hour of us, and we would love to share some of the burden of their adoption expenses as well.”