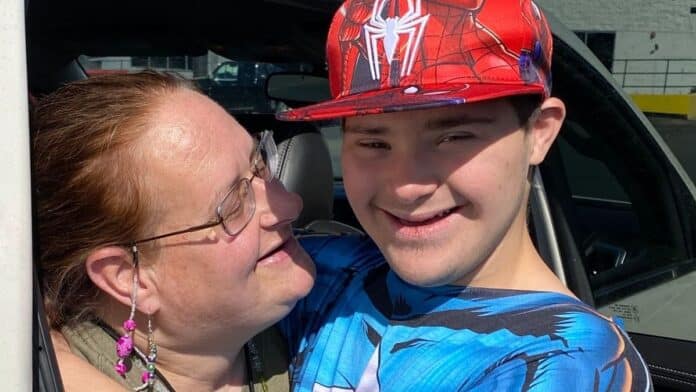 An adopted boy with Down syndrome was given a loving surprise when he opened a car door to discover his birth mom.

16-year-old Devlin Cropley’s reunion was the third such surprise his adoptive parents have planned in a year – as they previously reunited his one adopted sibling, Cameron, 21, with his best friend from a previous school, and another adopted brother, Joey, 21, with his biological sibling after 10 years apart.

Devlin currently lives with the Pinkerton family in Glenrock, Wyoming, having been adopted through The Down Syndrome Adoption Network, which places children and teens with the condition into homes.

Last year, Shannon Pinkerton, 50, who has adopted five boys with Down Syndrome, spoke to Devlin for the first time via FaceTime.

Over a number of weeks, the pair kept up their regular chats, with Devlin’s mom, Robin Barrett, also introducing herself, along with a number of social workers.

In October 2020, the Pinkertons collected Devlin from his home in Boston, Massachusetts, taking two plane rides and a drive back to Wyoming

With the coronavirus pandemic easing and Devlin having not seen his birth mom in almost a year, the families decided to plan a surprise reunion for the pair, on September 12.

Devlin was really missing his mom, the Pinkertons said, and having collected Robin from Denver, they hid her in the back seat of their car as Devlin walked outside his favorite restaurant.

There, he was encouraged to head to the car and open the back door, where he found a familiar face looking back at him.

The 16-year-old headed straight into his mom’s arms for a hug that was almost 12 months in the making.

The family share their life on TikTok, hoping to raise awareness for adoptions – especially for children considered to be special needs.

They are planning to legally adopt Devlin over the coming weeks.

Shannon said: “Devlin’s reaction made me tear up and I was happy to see him so happy – that smile said it all .

“We had Robin stay at house for five days, which was nice, as she could see his routine meet and meet our family in person.

“I knew Devlin was missing his mom and verbalizing it, so we made it happen.

“I called and asked if she could get to Boston on these dates, so we could surprise Devlin with a visit, and we bought her a plane ticket.

“We want to spread awareness about adoption, as there are so many kids, especially teens and kids considered special needs, that need families.

“I hope adopted families see that bio parents can play an important part in the child or teen’s life if they all work together.”