Home Good News Woman Surprised As Parade Of Friends Drive Past As She Rings Cancer-Free... 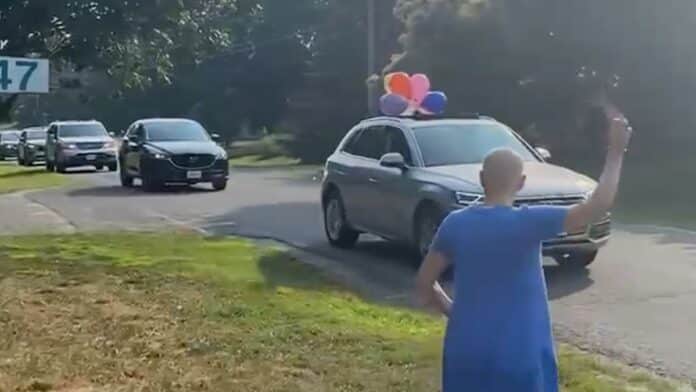 A woman is brought to tears as her friends surprise her by driving past as she rings the bell to announce she is cancer-free.

Trainer and movement mentor, JL McBain’s life was turned upside down after she was diagnosed with breast cancer on March 2nd, 2021.

Not long after that JL began her sessions on the strongest form of chemotherapy which is known as red devil.

With a passion for fitness, JL continued to run her gym from her basement including several virtual workouts throughout this time, according to covid protocols.

In July JL had her last treatment of chemo so the hospital asked her to ring their bell to mark this moment, however, JL told one of her clients at her gym that she would feel more of a relief ringing the bell when she knew she was cancer-free.

On August 20th, 2021, JL thought she was going in for a general conversation with her doctor when it was revealed to her that she had completely recovered and that she was clear of any cancer cells.

As soon as JL heard this she began to cry with happiness and went home to spread the news with friends and family.

By this time, JL had forgotten all about her previous conversation with her clients about ringing the bell when she got the all-clear, but her client had not forgotten.

The next day, her clients called a bunch of JL’s friends and planned to surprise her.

JL was at her home in Ottawa when she was called outside expecting her friend was only going to drop off flowers or simply give her a hug when instead she passed her a bell and said: “You said you would ring the bell, once you knew you were completely cancer-free, today is that day.”

The previous conversation came flooding back to JL so she began to ring it as loud as she could.

Whilst ringing the bell she began to cry as a parade of cars filled with her friends and clients drove past shouting their congratulations.

Her friends drove past because even though JL was cancer-free her immune system was still not 100%.

JL said: “The bell was a great surprise.

“They were driving by, and I was looking in the cars and going ‘oh my god.’

“It felt surreal and emotional because I hadn’t seen a lot of the people in the cars due to Covid, so it made the moment even more special watching them drive by.”

Navy Brother Surprises Sister Ahead Of Quinceañera After 1.5 Year Deployment

Boy With Down Syndrome Shares His Motivational Morning Routine

Father Whose Health Is Failing Surprises Daughter At Dream Home 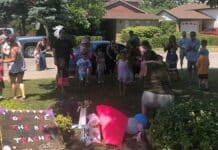