Home Good News Wife Surprises Husband Of 60 Years After They Had Been Apart Due... 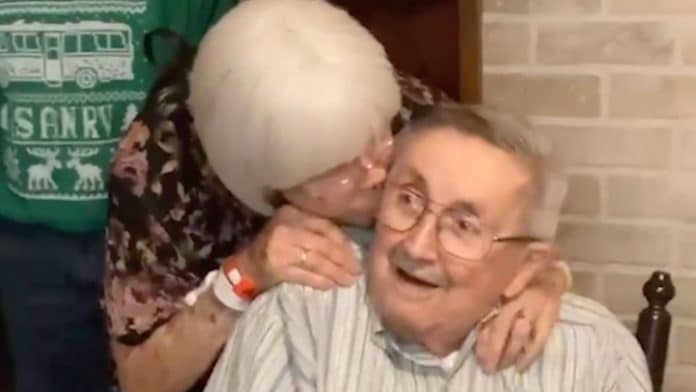 A wife surprised her husband of 60 years with a surprise reunion after a lengthy hospital stay.

In the beautiful video, Delmar Speak, 85, is sitting at a table in his family home in Frederick, Maryland, while family members chat around him.

Then, with Delmar totally unaware and facing the other direction, his wife, Barba, 77, snuck through the door behind him and began tapping Delmar on the shoulder.

At first, he doesn’t realize what is happening during the Christmas Day surprise, as he is deaf in one ear and-half deaf in the other, according to his family.

However, he then turns around to see his wife, double taking before the moment caused him to break down into happy tears as he became overwhelmed with emotion.

For most of December, Barba had been in hospital because of internal bleeding and congestive heart failure.

Their daughter, Karen Woodward, 59, said the separation was tough on the pair with the emotions of their reunion coming out during the big surprise.

She added: “It was so heart-warming watching the moment.

“My dad is deaf in one ear and half in the other, so it took a bit for him to realize it was mom.

“When he did, it was priceless – I love the double-take!

“We truly are thankful for all the love we have received from viewers of the video.”