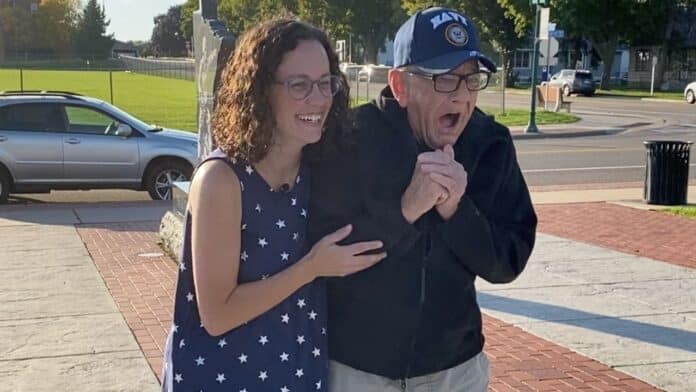 A beloved veteran has gone viral after TikTokers came together to raise money to surprise him with a new mobility scooter.

Kenny Jary, 79, couldn’t believe his eyes as he removed his blindfold to discover the gift, screaming with joy before sobbing happy tears.

The moment was planned by Kenny’s friend and neighbor, Amanda Kline, 36, from Willernie, Minnesota, who helped create Kenny’s popular TikTok page, @patriotickenny, back in August.

Over the months that followed, Kenny, an E3 helicopter refueler with the U.S. Navy between 1959 and 1963, began to see his support increase as he and Amanda posted content on the platform.

Then, suddenly Kenny’s American flag-adorned scooter – which he’d been riding on since 2003 – broke down beyond repair as parts for his old model were no longer being manufactured.

So, Amanda put out a call for help, setting up a GoFundMe page that had a modest opening target but ended up raising more than $110,000.

With the scooter secretly purchased, Amanda took Kenny to St. Paul Veteran’s Park on October 3, where he was blindfolded and told he was going to check out the new park as a surprise.

As he removed his blindfold, though, there was his new scooter – which Amanda had also secretly gotten painted by a local artist.

An emotional Kenny could not hide his appreciation for the gift, and a video of the moment then went viral on his TikTok channel, gaining millions of views.

The scooter, Amanda said, will give Kenny a renewed sense of independence.

She said: “I felt giddy and I knew he would be overtaken with emotion.

“He’d been without a scooter for so long…. It added a new element of independence for him because now he’s able to have access to a scooter when he goes places; something he’s never had before.

“Part of Kenny’s mission in having a scooter is to get out and talk to veterans and other people.

“Part of my mission in sharing the story as Kenny’s neighbor and friend is to encourage people to get to know their neighbors.

“You never know what they might be going through and how your skill set could help them, or vice versa.”

With the remaining funds and new donations, Kenny is surprising his fellow veterans with scooters to find out more check out his GoFundMe page.