Home Good News Soldier Breaks Down In Tears After Meeting His Eight-Month-Old Son For First... 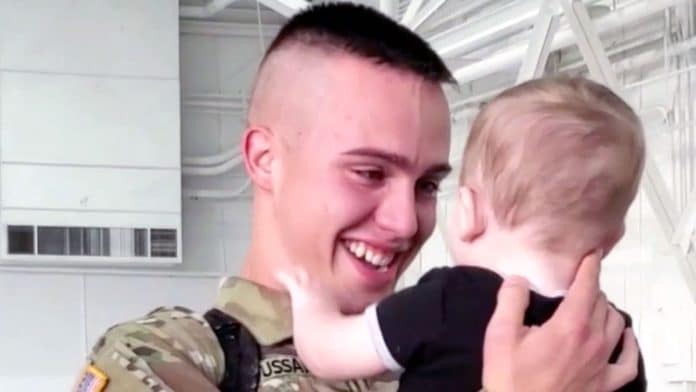 An emotional soldier couldn’t hold back his tears as he came face-to-face with his eight-month-old son for the first time after being on deployment in the Middle East when he was born.

Andrew Broussard, 24, was stationed in Kuwait for nine months, after initially undertaking three months of training in the United States.

As a result, Andrew’s high school sweetheart, Skyla, 25, had to undertake the final months of pregnancy without her loving husband by her side.

The journey was tough, Skyla said – though fortunately, Andrew, a sergeant with the Army National Guard, could be on call via video chat around the time of the birth.

Over the months that followed, Andrew watched his son, Micah, grow up through pictures and videos, but he still missed him dearly.

Then, in January 2020, the sergeant was given the news that he was headed home, where he could finally meet Micah, who was at the point eight months old.

In the emotional footage of the moment, Andrew enters a hangar at Alexandria International Airport, Louisiana, where his face lights up as he quickly spots his wife and child.

As he gets closer to Micah for the first time, the sergeant immediately began to well up, then embraces Skyla before finally holding Micah in his arms.

Since then, Andrew has been spending time at home with his son – though he was recently called out on National Guard duty to help with the relief efforts surrounding Hurricane Laura.

Andrew, from Youngsville, Louisiana, said: “Seeing him was one of the most powerful moments of my life – I knew exactly who he was and instantly loved him with open arms.

“The thing that really broke me was seeing how big he was and knowing that I will never get the time missed back.

“All I can do is make the best of our time going forward and never forget what it was like to sacrifice it.”

Skyla said: “It was very emotional – I knew he was happy to see him but also knew that the time missed was something he wouldn’t get back and be able to cherish.

“But I was also so proud of him for all that he does for his family.”