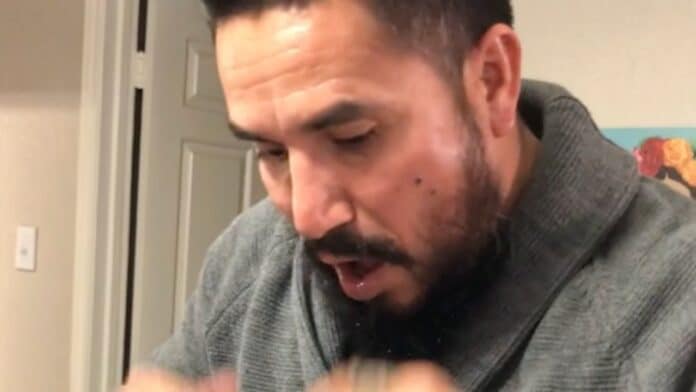 A sneakerhead is presented with a gift from his wife he thinks is new Jordans – only to discover a pregnancy test confirming he’s going to become a father after 12 years of trying.

Eric Sifuentez, 43, is a huge sneaker fan, and when his wife presented him with a Jordans box at his Midland, Texas, home, the gesture initially caused Eric to begin to dance with excitement.

But little did he know that wife, Beth Sifuentez, 36, had added a few little surprises inside.

The box contained a couple of pregnancy tests, some onesies, a bottle, and a mug of the Texas Longhorns – the college football team Eric is a huge fan of.

READ MORE: Grandma-To-Be Surprised With Pregnancy Reveal – But Doesn’t Pick Up On The Clues

As Eric opened the box he first picked up the mug which Beth revealed had a message inside – but as Eric read “this is for the sleepless nights” the true meaning behind the gift didn’t click.

But then he discovered a positive test and couldn’t hold back his emotions, immediately hunching over in tears before a long, thankful look up to the sky as he tried to process his joy.

Over more than a decade, Eric and Beth had been trying for a baby, but to no avail.

Eric credits Beth with helping him through some of the darkest times of his life, and it was always his dream to have a child with the woman he says saved him.

Having met in 2004 and married in 2007, Beth said that by 2015 she had seen family members having babies themselves and was starting to give up hope.

But she says after her late grandmother came to her in a dream and said to keep trying, she was later given a big surprise: when she tried a chance pregnancy test in work, it came back positive, causing her and her coworkers to cry together.

The moment took place on October 25, 2019, but Beth did not share the video on her TikTok page until recently, after the couple’s daughter, Victoria, now one, had been born.

She said: “I felt so happy and extremely excited to tell him – we had wanted a baby for such a long time.

“I knew his heart would burst as soon as he saw the tests.

“People were overwhelmingly excited to hear our story and they shared theirs as well.

“Some are still trying and some are like us who tried for years and were finally given their miracle.

“Never give up, never stop praying – miracles do happen.”