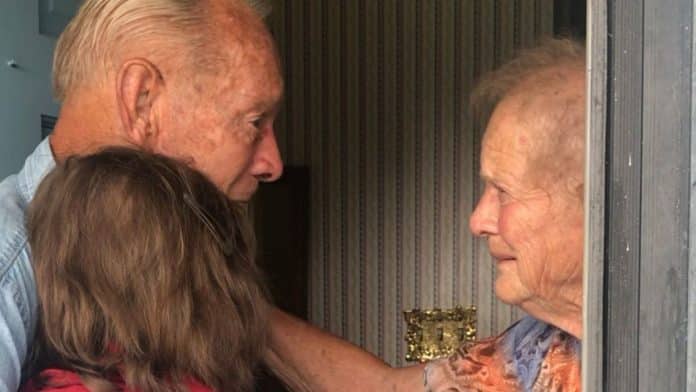 Two sisters surprised their brother in an emotional reunion 30 years in the making.

Ninety-two-year-old Joesph was left completely speechless on his doorstep when his sisters decided to head cross-country to pay him a surprise visit in person – the first time in three decades.

Joseph Bell did not initially recognize his sisters Carol Miller, 89, and Blanch Stockert, 90, who he had not seen in person since 1990.

Back then, Joseph had moved from his home in Illinois to Mississippi, and over the decades that followed, his sisters could not save up enough money to go and visit him.

In 1998, Carol’s husband also passed away, leaving her with little retirement money to live on and decreasing the chances of seeing her brother even more.

But this year, with the siblings getting older, Carol mentioned to her daughter, Rikki Hannig, 48, from Pekin, Illinois, that she would like to see her brother once more.

And so, back in June, Rikki and her husband, Steve Hannig, 50, decided to do their best to make that happen.

When they arrived at Joseph’s door, the two sisters plotted to casually call their brother, asking him to come to the front door.

As Joseph stepped outside, he immediately saw Carol and Blanch standing on his doorstep – a moment that caused him to double-take in realization of who it was.

RELATED: Veteran Given Surprise Reunion With Sister Ahead of Wedding Day Having Not Seen Her in More Than 40 Years

Then, after the 92-year-old let out a shocked expletive, the three siblings hugged for the first time in three decades.

Rikki captured the moment on video, which she shared with friends and family elsewhere, and her daughter, Michaela, posted on TikTok.

She said: “Family members cried at the video and were so happy that my husband and I took them down to see him.

“Friends and those on social media also found it very touching and asked more questions about the video.

“I can not believe the number of views and likes the moment has received on TikTok – it’s amazing.

“It’s never too late to reunite with loved ones.

“It is priceless to see the happiness in their faces when they reunite.

“Seeing them all together, poking fun at each other and laughing together, was one of the best times of my life  – and I think theirs, too.

“It doesn’t take too much to take time out of your busy or chaotic life to help make a loved one’s life better.

“It was such a great feeling to know that we were able to make someone that we love so happy.

“It was an awesome experience for everyone involved.”