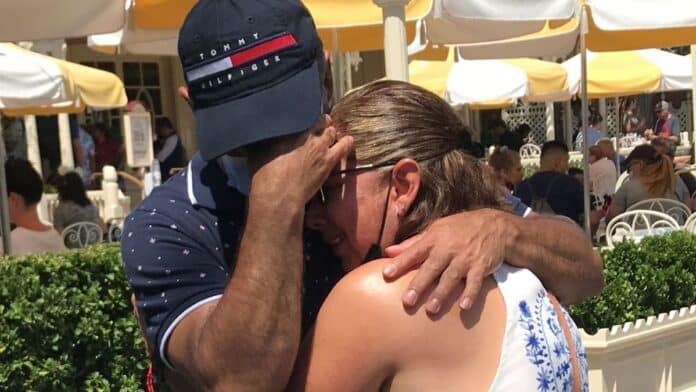 A brother and sister wept in each other’s arms at the “Happiest Place on Earth,” as their family secretly planned for them to reunite in Disneyland after 14 years apart.

In the emotional footage, Luz Banales, 56, can be seen walking through the park on July 21, when she spots a family face standing next to a stroller.

There, Luz’s brother, Juan Salcedo, 59, was waiting, and so his sister snuck up behind him and gave Juan a huge hug.

As the 59-year-old turned around to inspect who was holding him, the moment became too much for both siblings, with Luz crying in her older brother’s arms as he, too, wept happy tears.

The moment had secretly been planned by Luz’s daughter, Andreina, 23, who lives in Waukegan, Illinois, along with her mother.

Each year, Andreina said, her immediate family plans one main vacation – and due to health issues with certain family members, these annual trips had mostly been to Mexico over recent years.

As the years went past, however, Andreina knew how much her mother was hoping to make one such trip to see her brother win Palmdale, California, and having saved up enough money, she purchased tickets for the pair and her siblings.

Ahead of the trip, Luz was informed that it was, in fact, her brother who she would be meeting at Disneyland in Anaheim – but Juan had no idea, and his wife helped secretly plan the surprise.

With Andreina, her mom, and siblings waiting in the park, they were then given the go-ahead to sneak up behind Juan for a surprise more than a decade in the making.

Andreina, who shared the wholesome moment on social media, said: “We all walked towards each other and almost bumped into each other and my uncle did not even notice.

“My aunt, cousins, and I all started recording and my mom snuck up behind my uncle and hugged him from behind.

“It seemed like he had a moment in shock before he realized it was my mom that was hugging him.

“My mom began to cry and then my uncle did as well.

“I’m an emotional person so I started to cry behind the camera.

“It was heart-warming to see them together after such a long time.”