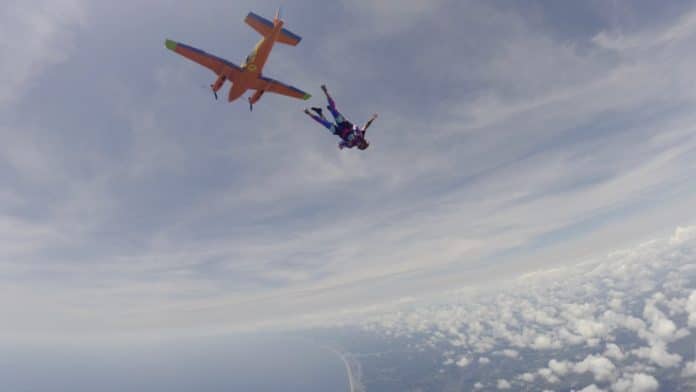 A father-to-be who is scared of heights discovered the sex of his baby through his first ever skydive.

In the adrenaline-pumping clip, Tim Goodwin hurtles towards the ground above North Carolina, totally oblivious about the sex of the baby he and fiancé Angela Hewett are due to have.

Staff at Skydive Coastal Carolinas had received a sonogram revealing the gender of Tim and Angela’s baby, and so, mid-freefall, two fellow divers set off pink smoke bombs to let the delighted couple know they are set to have a girl.

On the ground, pink smoke bombs were also set off on the landing strip, which provided a grand landing for ecstatic Tim.

Tim, 24 – who had never skydived before the May 11 jump – admitted he had to convince Angela, 29, over letting him skydive.

But she relented after he’d been through the safety procedures and he finally landed in a plume of pink smoke, revealing it was totally worth it.

Tim, whose baby is due on November 2 and has two other children, said: “I thought of the idea at least eight months ago because I’ve never seen it done.

“I’m terrified of heights and, having some fear of becoming a father to another child, figured I might as well tackle two of my fears at once.

“The moment I saw the pink smoke, I knew it was all worth it.”