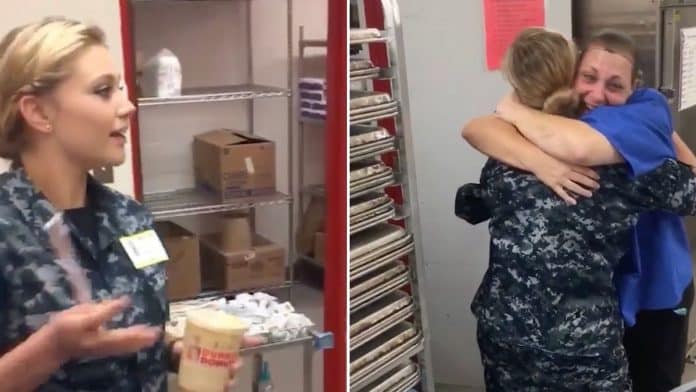 A sailor in the U.S. Navy surprised her mom at work after returning from her base after over a year.

The emotional reunion between Allyson Boltinghouse and her mom Sherry was caught on camera at Fort King Middle School in Ocala, Florida, where Sherry works in the cafeteria.

Allyson can be seen quietly creeping into the kitchen and shushing her mom’s colleagues as they look up in surprise.

As she navigates the maze like kitchen, she eventually reaches a doorway – where clutching her mom’s favourite coffee – she appears in front of Sherry.

With a huge scream of delight, Sherry embraces her daughter for the first time in little over a year.

Sherry said: “It was pure joy when I saw her standing there in the doorway.

“This was the first time I had ever been away from her for such a long length of time.

“She had been away for about six months at bootcamp and then technical training called class A School.

“Allyson surprised me at school, where I work for the school board. She had my favourite coffee in her hand to celebrate, a cold brew coffee.”

Allyson is an Aviation boatswain’s mates handler, otherwise known as simply ABH. They play a major part in launching and recovering naval aircraft from land and ships.