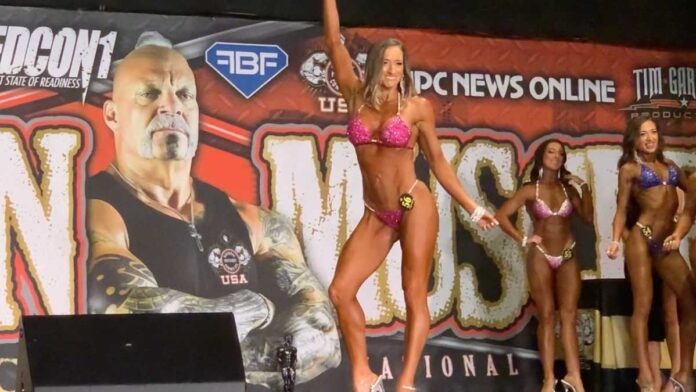 A woman who has suffered from chronic pain since she was a teenager has defied the odds to win a bodybuilding competition that most people in her condition would never even consider.

Ashley Yocum, 35, from Orlando, Florida, suffers from Fibromyalgia – a long-term illness that brings about widespread pain and tenderness in certain areas of her body, which makes day-to-day life extremely difficult.

In describing her condition, Ashley said that she never knows where the pain will be on her body, but it is always there, in one spot or another.

Some mornings, Ashley said, she will wake up and feel like she has been in a car accident, with the pain so intense that it’s a struggle to go about her day.

Ashley has suffered from chronic pain since she was in her teens, but it wasn’t until she was involved in a crash in 2017 – which also resulted in Ashley having a neck fusion – that a doctor diagnosed her condition.

Previously Ashley had coped with her pain by, for example, lying on a blow-up mattress on her living room floor or lying upside down to relieve her back and neck pain

Following the diagnosis, Ashley said that she joined a number of support groups that, she felt, were taking the wrong attitude.

Those with similar conditions, Ashley said, were remaining in bed, not looking to move their bodies or face life because of the pain they were in.

Ashley decided that this was not the way she was going to define herself, and so she began spending her spare time training as a bodybuilder – a sport she had been fond of since her husband, Drew, had previously entered competitions in.

Eventually, Ashley built up the confidence to enter an event herself, with the aim of moving through the ranks of competing locally, then nationally, and finally as a pro.

For roughly two months before the local competition, Ashley trained for four hours a day, focusing not only on her nutrition but also having to take breaks in between workouts to hang upside down and take the compressing pain off her neck and back.

On April 10, Ashley then competed in the Mel Chancey Champion Muscle Classic held in Orlando, Florida, accompanied by Drew.

The event was extremely tough, Ashley said, as she had little to no breaks and could not use the likes of heat patches and rubs that she uses daily to cope with her pain.

Ashley said she had nerve pain, her back felt “on fire,” and backstage her legs would shake because of the agony she was in.

But despite the obstacles, the 35-year-old managed to finished 1st in the True Novice category and, more importantly, 1st in Open Class D, which allowed her to qualify for national events.

Ashley said: “I found so much support within the other competitors as if we were all a team.

“I felt like I finally had a purpose and had found my itch.

“No-one backstage knew what I was going through and I wasn’t about to tell them.

“I decided I was going to motivate others backstage instead of feeling sorry for myself.

“So I kept my mind off my pain by meeting new people and helping the other girls through their anxiety.

“My diagnosis says that there is no cure, but I will never be satisfied with that answer.