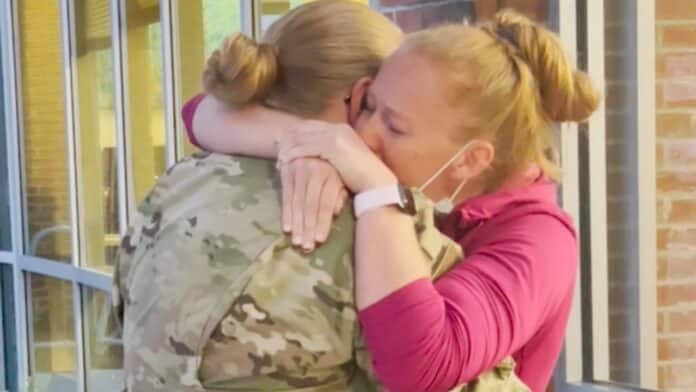 A healthcare worker mom emotionally runs and jumps into her airman daughter’s arms who’d returned home from deployment after the longest the pair had been apart.

D’Anna Capriotti didn’t seen mom Hayley for over four months while she was deployed overseas with the U.S. Air Force with her mom counting down the days until she was due home.

But little did Hayley know, D’Anna was on her way home early, and after surprising her dad Chris on the morning of August 3 she couldn’t wait to surprise her mom too.

So the pair immediately headed to Southern Ocean Medical Center in Manahawkin, New Jersey, where Hayley works in the ER, with Chris ready to capture the moment on camera.

As soon as D’Anna walks around the corner Hayley turns around to spot her and runs towards her in complete shock, leaping into her arms for a tight embrace.

Hayley said: “For 20 years, this is the longest I’ve gone by far without seeing my firstborn.

“It was an amazing surprise to see her well before I actually thought I would.

“All of my anxiety and stress worrying about her overseas was lifted and it was such a sigh of relief – all I could think was how happy I was to have my baby back.”