Home Good News Mom Comes Up With Way of Keeping Baby Entertained by Recording Him... 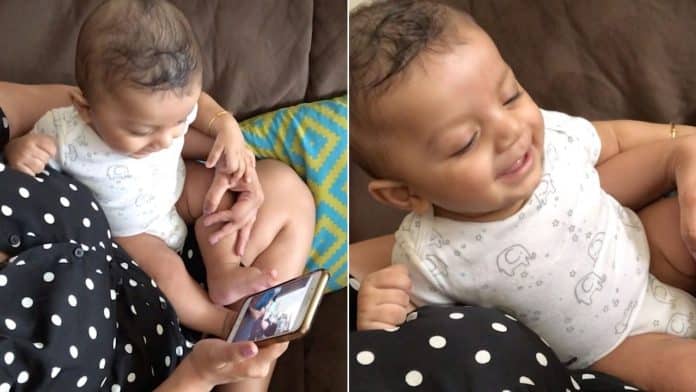 A mom came up with a sweet way of keeping her baby entertained – by recording him laughing and playing it back to him creating a hilarious loop of adorable giggles.

The heartwarming clip shows six-months-old baby Yuvaan chuckling away uncontrollably as he sits on mom Priyanka Porwal’s lap watching a video of him laughing filmed by dad Vineet.

In the original video, Priyanka was trying to cheer her son up and as he started laughing, Vineet started recording so Priyanka could watch it back.

As she hit play, she noticed Yuvaan started laughing again so Vineet filmed the moment creating another loop of laughter for the family.

Priyanka, from India, said: “I was cheering up my son about an upcoming cruise trip and he just started laughing hard at the way I said it.

“My husband took a video and when I was watching the video back of him laughing he just started watching himself laughing – his laughter really is contagious.

“He still giggles watching this video, my husband suggested we should make another loop of the video.

“My son is very happy go lucky and loves giggling whenever we play with him.”