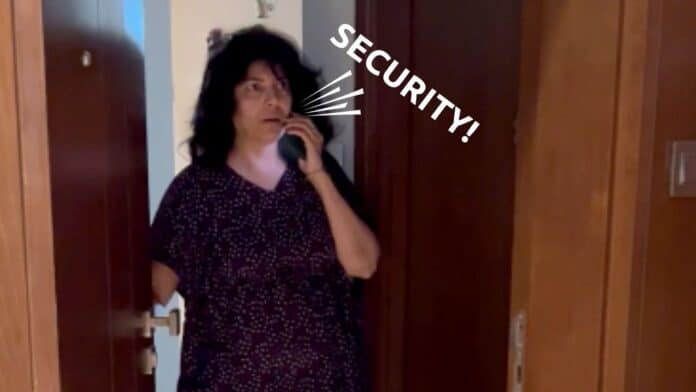 A daughter’s wholesome and tear-filled surprise reunion with her mom after two years apart was nearly blown when her unsuspecting parents contacted security in their building.

Having reached her parents’ apartment, Sikta Samantray, 26, decided to cover the eyehole on the front door as she rang the bell for her mom to let her in.

Not expecting visitors, Sikta’s mom, Margaret, 50, became suspicious of the fact that the door camera was blacked out, asking her husband what she should do about a potential risk.

It was suggested that she call the apartment block’s security, and so Sikta had to act fast in order to keep her plan on track.

She asked one of her mom’s friends to call her to open the door, and thankfully, before things got out of hand, Margaret relented.

When she opened the front door, on March 4, Margaret immediately froze before crying hysterically from the shock.

Sikta, who is originally from Canada, graduated medical school at the University of Queensland, Australia, two years ago, but due to the pandemic, work and border closures, she was unable to head home to celebrate.

Months became years, and when the borders opened up again, Sikta knew she had to plan a surprise trip to see her parents, who now live in Abu Dhabi.

She got her brother and family friends involved, and as not to raise suspicion, she told her mom that she was taking a flight across Australia to Melbourne that day.

But Sikta instead landed at an airport near her parents’ home, where her family picked her up ahead of the big surprise.

Speaking of the moment, Sikta, who works as a doctor back in Australia, said: “I just wanted to see mom’s reaction.

“My legs were literally trembling when I gave her a hug.

“It’s hard to explain how I felt, but it was pure joy.

“The response to the video has been extremely positive, with a few tears.

“This pandemic has been difficult for many families – however, with a bit of normalcy on the horizon, there truly is nothing more special than family and I think this video sums it up.”