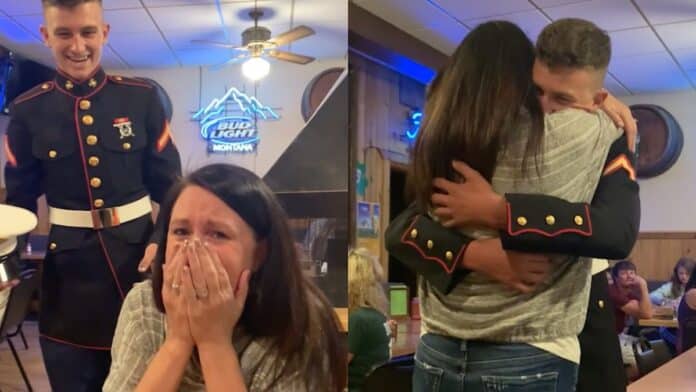 A Marine crept up behind his mom and gave her a huge hug as he unexpectedly returned home from a nine-month deployment.

Tanner Watson from Great Falls, Montana, had been out on duty since March.

After telling his mom, Tiffeney Kriedeman, he wouldn’t be at home till January, he knew his mom would be even more surprised to see him.

So Tanner organized – along with his brother Kobe Linn – a family gathering at a local restaurant in their hometown.

After the family had been seated, Tanner had his high-school friend drive him to the surprise reunion.

Tiffeney was seated with her back to the entrance, so Tanner quietly approached from behind – before he grabbed his mom from behind in a bear hug.

So startled was she, his mom initially pushed him away, but as soon as she turned around and saw the uniform it hit home that her military son had returned.

As tears flooded down her cheeks, other guests in the restaurant applauded as they stood in each other’s arms.

READ MORE: Military Mom Surprised By Marine Son As She Unwraps His Present To Her

Tanner said: “I was super nervous and excited – a lot was going through my mind.

“When I hugged my mom, I felt as if I hadn’t been home in years, and knowing I could come home making my family proud was a great and touching moment I will always cherish.”

Tiffeney said: “I had just talked to Tanner that Tuesday, and he informed me that he was not able to come home in January which made me very sad.

“When he put his lid in front of me and I realized it was him it is a feeling you can’t describe.

“Surprise, happiness, and so many emotions in one.”

Kobe said: “It was one of the most exciting things I’ve been part of!”