Home Animals Kindhearted Man Rescues Bird From Predators After It Gets Frozen To The... 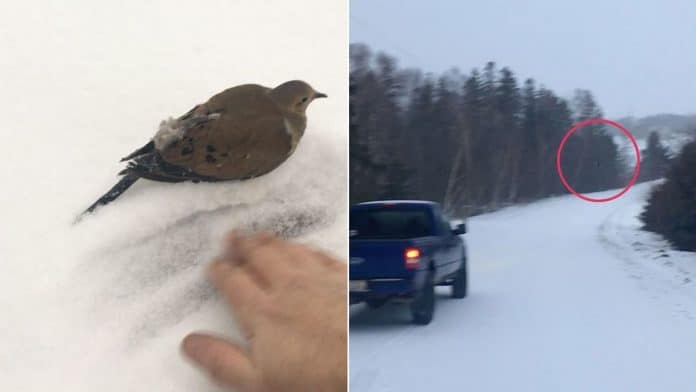 A kind-hearted man has captured the moment he helped free a bird completely frozen to the ground.

Sandy Doucette, 38, was driving near his home in Meadowbank, Prince Edward Island, Canada, when he saw a flock of birds fly up into the air.

But on closer inspection, Sandy noticed that one of the birds failed to take off and was stuck to the snowy road surface – perhaps caused by freezing rain and snow that had hit the island ahead the January 12 rescue.

Sandy approached the bird and began to slowly dig around its feet.

Once the snow was cleared and he could see the bird’s feet were frozen to the road itself, Sandy began delicately pushing the ice around the bird’s feet, hoping to break it free.

Sandy said he lives in an area with many foxes, eagles and coyotes that could have hunted the bird, and so he simply felt compelled to let it free.

Eventually, the bird’s feet came loose, and it flew off into the distance.

Sandy said: “I just thought this bird could use some help – it seemed like a bad way to die, as it would have if it was left there.

“I live in the country with lots of foxes, eagles, coyotes and ruthless crows that could or would have eaten it.

“Any car driving by would have run over it, and especially the snowplow, which wasn’t far away.

“It could have also frozen to death.

“It felt really great and was awesome to help an animal in distress, especially when it wasn’t hurt.

“Hopefully it rejoined its friends.

“The message I would like to point out is be on the lookout for animals or people who need a hand.

“It took less than a minute for me to do this and it made a big difference.

“Always keep an eye out.”