Home Good News Man Proposes To Girlfriend While Friends And Family Watch In Isolation Via... 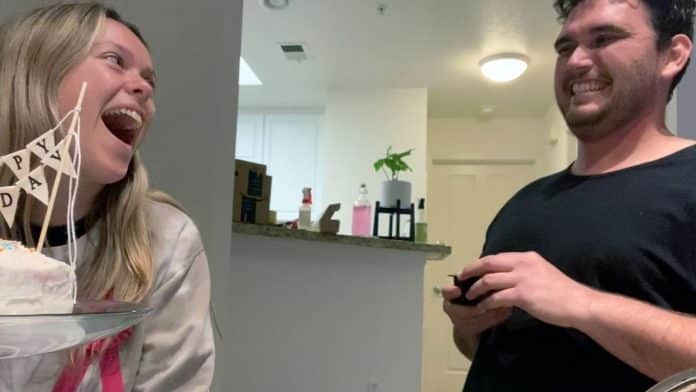 A loving boyfriend got down on one knee to propose while his girlfriend’s friends and family were all watching via video chat after singing Happy Birthday to her.

Raymond Brenier, 27, had planned a big outdoor surprise for girlfriend Bridgette Page, 27, but with COVID-19 shutting down Newport Beach, California, Raymond had to pop the question another way.

He decided to turn to Zoom for the answer, planning a birthday chat for Bridgette that would include 33 of her friends and family.

As everyone gathered on the April 7 call – from San Diego to Newport Beach to El Paso, Texas – Raymond asked everyone to sing to Bridgette from wherever they were in the world.

He had informed everyone in advance, letting them know that after some well-wishes and birthday chat, he would say to Bridgette, “I have one more surprise for you,” which would be the cue for the birthday song.

But Raymond actually had two surprises planned for his girlfriend, and, in a moment captured in a wholesome video, he got down on one knee right after the song had finished.

Watching online, friends and family cheered as Bridgette said yes and wiped the tears away from her eyes.

Bridgette said: “I had zero clue that it was happening at this time – it felt really special to have our friends and family there to witness it.

“I still can’t believe he pulled it off without me knowing anything.

“I think he and everyone else were relieved they didn’t have to keep a secret anymore.

“I had few friends reach out about the video to say it was so nice seeing something exciting and happy to watch.

“Lots of my girlfriends said they cried happy tears watching the video because it was so cute and just made their evenings.”