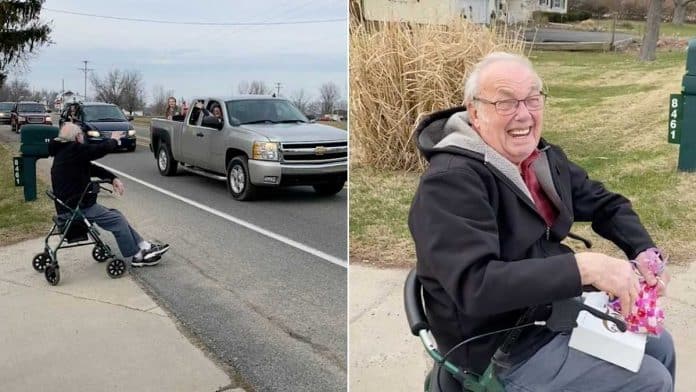 An 86-year old man who was alone during COVID-19 isolation was moved to tears when his whole family arranged a drive-by parade to let him know they were still thinking of him.

Orv Boerman’s wife of 63 years, Marge Boerman, passed away in 2017, and with the coronavirus pandemic preventing family members from keeping up their frequent visits, the loneliness was really getting Orv down.

And so, on March 27, a stream of eight cars carrying 18 of Orv’s relatives all drove past to surprise him, with Orv initially sitting at end of his driveway, not knowing what to expected.

The lovely gesture, filmed by his daughter Pam Gregorski from a safe distance, took place in Byron Center, Michigan.

Eventually Orv was brought to tears by the outpouring of support, Pam said, as he had not been expecting to see his five children, their spouses, and his grandchildren and great grandchildren for some time.

Pam, 52, said the family arranged the surprise because they could tell Orv was down and they were concerned about how the loneliness and isolation was impacting his health.

Orv said he was blown away by the surprise, which saw his family wave, toot their horns and stop for short well-wishes.

Some of his grandchildren also handed the 86-year-old some of his favorite foods for comfort, which were then taken inside and the packages bleached down.

After Pam shared the video on her Facebook page, others were soon to share the love – the post receiving more than 100,000 shares in a matter of days.

Pam, from Grandville, Michigan, said: “He was so happy and said it was a really good time.

“You can not see it in the video, but he did have some tears in his eyes at the end – he really loved it.

“I was surprised when people started to share our video.

“I think it gives everyone a feeling of solidarity, that we are all experiencing the same feelings as we deal with this crisis.

“I am glad to hear that other people are doing the same thing now.

“Reaching out to our elderly is so important, especially now.”